Does drinking alcohol mixed with energy drinks cause more alcohol consumption? Do drinkers feel more intoxicated? Does it lead to more risk-taking behavior? These are important questions. And they’re hotly debated. The concerns have led to laws, regulations, and public policies. 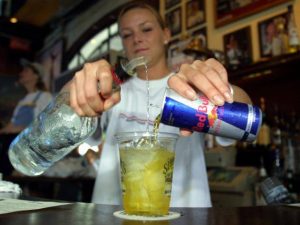 Many people and organizations suggest that caffeine in energy drinks can mask the effects of alcohol. They argue this may make people drink more alcohol. This is a plausible idea. Research can determine if it’s really true.

Mixing the beverages appears to be widespread. For example, surveys of students and young adults in the U.S. have been have been made. They report incidence rates of between 8.1% and 64.7%. Among young adults in Australia, the range is from 21.1% to 77%. However, random samples of adults of all ages in various countries exist. They report rates under 15%. Nevertheless, large numbers of people are engaging in the practice.

To investigate the impact of drinking alcohol mixed with energy drinks (AMED), researchers made a systematic review and meta-analysis of the evidence.

They searched PubMed, Embase, and Psycological Abstracts. In doing so they used the keywords “energy drink” and “alcohol. They then analyzed the resulting 747 publications.

Some questions asked about the heaviest drinking occasions during the previous month. On those occasions, AMED consumers drank much less alcohol when they mixed it with energy drinks than when they didn’t.

The research found the subjective intoxication of AMED consumers was the same whether they mixed beverages or not.

In conclusion, when compared to AO consumption, AMED