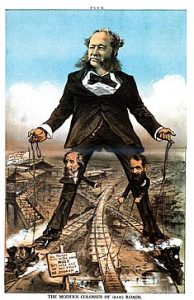 It was abolishing the old telephone monopoly that made possible the dramatic expansion of communication products that we take for granted today. And it was deregulation of the airline industry, opening it to competition, that led to large drops in air fares prices. It’s competition among computer companies that reduces prices and expand the diversity of products available.

Monopolies and near monopolies (oligopolies) only benefit the monopoloies and oligopolies themselves. They harm everyone else by increasing prices, reducing choice, and poor service.

Surprisingly, many people want to increase the price of alcohol beverages They want to reduce the selection of brands, and make them more difficult to buy. That’s because they support neo-prohibitionist ideas. And they also strongly support the remains on prohibition that continue.

Maintain old Colonial-era Blue laws prohibiting the purchase of alcohol on Sundays. although it is the second busiest shopping day of the week.

Prohibit retailers from purchasing directly from producers. That would eleminate unnecessary middlemen who only add to the cost that consumers must pay.

Maintain government alcohol sale monopolies in those states that have them.

Expand government alcohol sale monopolies to states that don’t have them.

Prohibit the use of credit and debit cards for the purchase of alcohol.

Severely restrict the number of stores.

Government monopoly stores often resemble the old Soviet stores with their take-it-or-leave-it surly attitude of indifferent state bureaucrats. They enjoy secure jobs that are unrelated to customer service and satisfaction.

State alcohol monopolies resulted from the continuing power of the temperance movement following the Repeal of National Prohibition.

There are currently 18 alcohol monopoly or control states in the U.S. The term “control state” is popular but misleading because all states control and regulate the sale of alcohol. Therefore every state is a control state but only 18 are monopoly states.

Temperance Movement Today in US: Neo-Prohibitionism.

Prohibition Supported by Almost One in Five Americans Today.