I. What is Alcohol Poisoning?

Alcohol poisoning is the potentially life-threatening result of drinking too much alcohol too quickly. Such drinking leads to a dangerously high blood alcohol concentration (BAC). When it becomes too high, the brain becomes very impaired. It can’t regulate breathing, heartbeat, and other essential functions. Untreated, alcohol poisoning can lead to death.


Overview
I. What is Alcohol Poisoning?
II. Signs and Symptoms .
III. What to Do
IV. What NOT to Do
V.  Risk Factors
VI. Treatment
VII. Prevention
VIII. Alcohol Poisoning Facts
IX. Resources

Any of these signs may result from alcohol poisoning. Don’t wait for someone to have more than one symptom. If in doubt, call 911 immediately for emergency medical help. Don’t let fear of possible punishment lead to delay. Letting a person die is much worse than punishment.

Fortunately, both states and colleges often have medical amnesty or good Samaritan laws or policies. Better safe than sorry. So call 911 if a person who has been drinking shows any of these symptoms.

III. What to Do

After calling 911, help the person until medical professionals arrive. To do this:

IV. What NOT to Do

Never do any of the following.

What Happens to Alcohol in the Body.

How Long Does Alcohol Stay in the Body?

Age. Young adults are more likely to drink excessively and to overdose.

Gender. Men are more likely than women to drink heavily. Thus, they have a greater risk.

Body Size. Being small increases BAC, other things being equal.

Tolerance. Having a high tolerance for alcohol increases the risk.

Some Drugs. Certain drugs reduce the sensation of intoxication. Therefore, they increase the risk.

As needed, they provide treatments. These may include things such as the following.

The way to prevent alcohol poisoning is either to abstain or to drink in moderation. Here are some tips for moderate drinking. 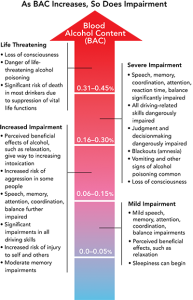 Alcohol Overdose: The Dangers of Drinking Too Much.