Alcohol proof. What is it? Is it different in different countries? How did it get that name? You’ve come to the right place for answers.

So what’s alcohol proof? In the early 1700s, people measured the alcohol content of distilled beverages by using gunpowsder. That is, they would “prove” the beverage acceptable.

To do so they poured some on gunpowder and lit it. If it burned steadily with a blue flame, it was considered “proof.” However, if it did not burn, it was “underproof.” That is, unacceptable. And if it burned too quickly it was “overproof.”

In the UK 100 alcohol proof equals 57.1% ethanol by volume. The gunpowder test is the origin of this definition of proof.

In the US, alcohol proof is double the percentage of alcohol in a solution. That’s when the solution is at 60 degrees Fahrenheit or 15.6 degrees Celsius. Thus, 150 proof would be 75% alcohol and 100 proof would be 50% alcohol.

Pure alcohol (200 proof alcohol) rarely exists outside a lab. That’s because if pure alcohol is open to the air, it will absorb moisture from the atmosphere. Thus it will self-dilute down to about 194 proof.

In France, alcohol content is in degrees Gay-Lussac (GL). A tech tests the solution with a hydrometer. Then the person expresses alcohol strength as parts of alcohol per 100 parts of the mixture. Thus, a spirit with 40% alcohol by volume equals 40 degrees GL.

The International Organization of Legal Metrology recommends how to measure alcohol strength. A tech distills away all the alcohol, condenses it, and weighs it. The person then expresses the results as a percentage of alcohol by weight (ABW).

Alternatively, the tech measures the volume of alcohol distilled and expresses it as a percentage of alcohol by volume (ABV). The person performs the measurement at 20 degrees Celsius or 68 degrees Fahrenheit. Dividing ABW by .079 converts it to ABV. 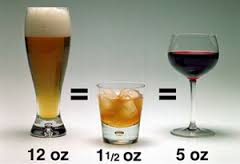 The alcohol proof of standard drinks of beer, wine and spirits (liquor) differ. Yet each contain an equivalent amount of alcohol. That is, 0.6 ounce each.

This fact is very important. People tend to fool themselves. They don’t know that standard servings of beer, wine, and spirits have the same amount of alcohol. In fact, they’re all the same to a breathalyzer.

Mississippi had state-wide prohibition of all alcoholic beverages for one-third of a century after the repeal of National Prohibition. In fact, hundreds of prohibition or dry counties exist across the U.S. And they make up almost 10% of its area.

This legalized low alcohol proof beverages. However,  states could keep their own prohibition. As a result, 20 states and the District of Columbia began permitting the sale of low proof alcoholic beverages. They did so on April 7, 1933. That is when the law became effective.

The 21st Amendment repealed the 18th Amendment (and National Prohibition) on December 5, 1933.  Of course, Repeal made the Cullen-Harrison Act moot. However, the 21st Amendment gives states the right to define and regulate alcoholic beverages within their borders.

Today, six states continue to use the old Cullen-Harrison definition. That is, that 3.2% ABW or less are “non-intoxicating.” They are Colorado, Kansas, Minnesota, Missouri, Oklahoma, and Utah.

At this point, you now know much more about alcohol proof tea most people. Congratulations!