Leslie Keeley was an early proponent of the disease theory of alcoholism. He began promoting the idea in the 1870s.

History remembers Keeley for two things. First was his assertion that “alcoholism is a disease and I can cure it.” Second was his alleged “gold cure” for alcoholism and other substance problems.

Keeley’s theory of alcoholism as a disease changed over time. However, he basically believed that alcoholism resulted from damage to nerve cells from alcohol. This, he said, weakened the victim’s will power. His treatment was to detoxifying their cells and return them to proper functioning.1

Dr. Keeley’s secret formula supposedly contained bichloride (double chloride) of gold. But analyses revealed that it had no gold in any form. However, one analysis found it contain alcohol (almost 28%), sulphate of stryechnine, muriate of ammonia, atropine, and boric acid.2 Other analyses reported finding apomorphine, aloin, belladonna, hyoscine, scopolamine, opium, and morphine.3

Leslie Keeley opened his first treatment facility in Dwight, Illinois. That was 1879. Officially, it was the Leslie E. Keeley Gold Cure Institute for the Treatment of Inebriates. It was a great financial success. At its peak, it treated 700 patients at any one point in time. “Going to Dwight” was a euphamism for getting alcoholism treatment.4

Then some patients had very serious side effects from one or more of the secret ingredients in their medication. So between December of 1885 and June of 1887 Keeley stopped treating patients. He had to formulate a less dangerous “cure.”6

One of his business partners later reported that “The only patient who ever received Keeley medicine that actually had gold in it almost died… but the use of gold in the product name was kept to enhance sales.”7 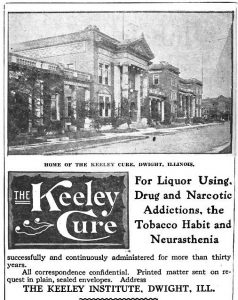 But Keeley was an enterprising self-promoter and widely advertised. He even used billboards. Indeed, Keeley wrote most of his early testimonials himself!8

In 1890, the entrepeneur began selling Keeley Institute franchises. There was even a Keeley Day at the 1893 World’s Fair in Chicago. By that year  there were 92 Keeley Institutes. They operated in the US, Canada, Great Britain, and Mexico. The number continued to grow to over 200.9

Keeley negotiated a contract with the U.S. Surgeon General to use the “Keeley Cure” in all branches of the National Home for Disabled Volunteer Soldiers across the country.10

Some Keeley Institutes offered “kick-backs” to physicians who referred patients to them.

Legislatures in Colorado, Louisiana, Maryland, Minnesota, North Dakota, and the Oklahoma Territory passed “Keeley Laws. ” These subsidized Keeley Institute treatment of indigent alcoholics. And these laws were promoted by legions of Keeley League members. These consisted of more than 30,000 former patients in 370 chapters across the U.S.11

Keeley Institutes also treated women. They had separate facilities. Many of the women former patients formed their own Keeley League chapters. They, too, promoted “Keeley Laws.” Thus, Keeley had many happy former patients, both male and female, promoting his business.12

Keeley’s success led to widespread imitation. In 1892, he said he believed that there were 277 imitator institutes promoting alledged gold cures. Some operated at over 60 locations. Therefore, he constantly warned the public against these “impersonators.”13 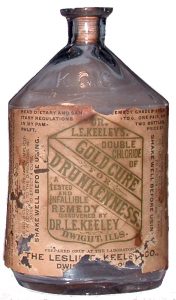 Keeley’s expensive 31-day treatment routine was simple. Patients were given a decreasing ration of alcohol to drink. Four times daily they were given injections of the “gold cure.'” Every two hours they received a tonic. That was combined with good food and rest.14

Dr. Keeley claimed a permanent cure success rate of 95%. He insisted that those who returned to drinking were completely cured. They simply chose to drink.15 However, The Christian Advocate estimated that about half relapsed. Or as Keeley might say, “chose to drink” again. Indeed, in later years the claim was lowered to 50%.

Leslie Keeley published widely in the public press, but never in any medical journal. And he always kept the contents of his gold or “Keeley cure” a secret. The medical establishment was unconvinced of his claims and methods. Rightly so. Indeed, chemists said there’s no such thing as bichloride or double chloride of gold.16 Understandably, he was often called a quack.

A major authority on alcoholism criticized gold cures as quackery.

There is no gold cure for inebriety. There are no facts to show that gold has any value in this disease. All the assertions and statements concerning gold as a remedy are delusions, and will not bear the test of critical examination.17

Critics argued that if the gold cure were really effective, keeping its contents secret would be a gross violation of medical ethics. It would prevent replication studies, peer review, and scientific evaluation. That would harm both alcoholics and society.18

Yet Keeley refused to divulge the formula. Apparently, he felt no need to do so. One journalist observed that “Dr. Keeley is said to be getting very wealthy from his inebriate-cure establishments – struck a bichloride of gold mine, so to speak.”19 In one year alone, Keeley’s income was $1,400,000.20 In today’s value, that would be an annual income of $379,300,000. That’s over a third of a billion dollars in one year. And there was no income tax. Why kill the goose that lays the golden egg?

People often criticized Leslie Keeley as a fraud. For example, one physician expressed his outrage in a medical journal as follows.

I desire to state in a most emphatic manner that the Keeley cure is a shameless, bare- faced, money-making scheme, as practiced, and the men engaged in it are totally devoid of ethical honor.21

Although rich by any economic standard, Keeley continued to face problems. For example, in 1898 the U.S. Treasury Department ruled that the Double Chloride of Gold Remedies were taxable. Keeley’s appeal was unsuccessful.22

At the time of Dr. Leslie Keeley’s death in 1900, more than 400,000 men and women had been treated at Keeley Institutes.23 He died a multi-millionaire. His business partners took over the company. But the Keley Institutes began a slow decline.

In 1905, the Food and Drug Administration investigated. It revealed that most of the Keeley medicines contained high dosages of morphine, cocaine, alcohol and cannabis.24 Because of its credibility, the FDA announcement undermined public confidence in the Keeley Institutes.

The decline continued for decades. The original, and last, Institute closed in 1966.25

The quest for a medical cure for alcoholism continues today. But that road is difficult. It’s not even clear that alcoholism is a disease. It may be a behavioral rather than a medical problem. According to federal government research, most diagnosed alcoholics quit on their own without any outside help.

Calhoun, A. Is it “A Modern Miracle?”  A Careful Investigation of “The Keeley Gold Cure” for Drunkenness and the Opium Habit. NY: People’s, 1892.

Clark, C. and Keeley, L. The Perfect Keeley Cure [for inebriety]. Milwaukee: Burdick, Armitage & Allen, 1892. (This is the only edition that discloses that Keeley was co-author.)

Note: Sources give many different birth years for Leslie Keeley. They range from 1832 to 1842.