They then compared moderate to heavy drinkers. The latter had a 26% greater risk compared to moderate drinkers. In calculating risks, the researchers controlled or adjusted for age, sex, smoking, body mass index, and level of education. 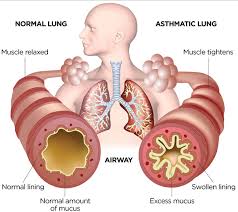 In asthma, airways narrow and produce too much mucus. Breathing can become difficult and cause shortness of breath, wheezing, and coughing. It’s a chronic or long-term illness.

Asthma can restrict activities and an asthma attack can cause death. It’s a chronic or long-term illness. There is no cure for the disease. Nor is it clear why some people develop it.

Resources: Risk of Asthma Reduced by Drinking Alcohol in Moderation

This website is informational only. Thus, it makes no suggestions about any matter. That includes the finding that the risk of asthma is reduced by drinking alcohol in moderation.