Which is better for health, beer or cola? Of course, in the beer vs cola competition, each has its defenders and distractors. (Also see Beer is Better than Milk for Good Health & Weight. So are Wine & Distilled Spirits or Liquor.)

As a matter of fact, many people think beer causes so-called “beer bellies.” Some even consider beer a four letter word. On the other hand, one large activist group opposes cola. It actually avoids the word “cola.” instead, it favors calling colas “sugar drinks'” and “liquid candy.”1

I. Beer vs Cola

In fact, the U.S. Department of Agriculture (USDA) has analyzed the contents of both. It provides the following information.2 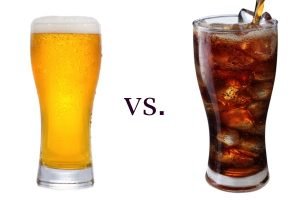 In addition, the USDA shows that cola contains most, but not all, of the minerals found in beer. But it contains no vitamins at all. On the other hand, beer provides thiamin, riboflavin, niacin, vitamin B-6, follate, and vitamin B-12

Beer also has a strong advantage over cola nutritionally. That is, it has no fat and no sugar. It also has fewer calories and less carbohydrate. In addition, beer provides more minerals. And tt provides vitamins. On the other hand, cola has none at all.

The glycemic index (GI) is important. Specifically, it measures how quickly a food or beverage causes our blood sugar (glucose) levels to rise. It measures food from 0 (water) to 100 (sugar). Thus, those with a higher GI cause a rapid rise in blood sugar.

However, the GI can be very misleading. The glycemic load (GL) is much accurate. It’s also more realistic. The GL includes both the quality of carbs (the GI) and the quantity of carbs. Just as in the case of GI, a high Gl is bad.

Drinking coke would lead to a “beer belly” faster than drinking beer!

For example, watermelon has a high GI of 72 but a GL of only 2 per 100 gram serving. That is, it has carbs that quickly raise blood sugar. However, it has very few such carbs. Thus, it has a very low GL.

As a result, people whose diets focus on a low glycemic load do the following.

Beer has yet another advantage over cola. It contains alcohol. And drinking alcohol in moderation leads to better health and longevity than abstaining.

When it comes to beer vs cola, there’s really no contest. Beer is dramatically better for health and long life.

Beer is Better than Milk.

Wine vs Grape Juice: Which is Better for Health, Long Life?

III. Resources on Beer vs Cola for Health

Liquor vs Non-Alcoholic Beverages for Health.

1 Liquid Candy. Center for Science in the Public Interest.