The beginnings of temperance in America started very slowly. They began modestly. Temperance meant drinking temperately or moderately. Temperance proponents might urge people not to drink too much. They might urge them to reduce how much and how often they drank. But most often, they would encourage them to drink beer or wine instead of spirits. (Spirits are rum, gin, whiskey and other distilled beverages. They’re often called liquor.)

Beginnings of Temperance in America: Timeline.

Emergence of Temperance in America: Timeline.

The idea that people should not drink spirits was based on a myth. That is that spirits are more alcoholic than beer or wine. But standard drinks of beer, wine, and spirits have the same amount of alcohol. Specifically, it’s 0.6 ounces of pure alcohol. So alcohol-wise, they’re all the same.

This myth may have been started by Dr. Benjamin Rush. He wrote a famous pamphlet claiming that spirits were bad for people. He urged them to drink beer and wine instead. His paper was based entirely on speculation. That is, he didn’t do any research on the subject.1

The first attempt to impose prohibition in the New World occurred. Governor John Winthrop of Massachusetts attempted to prohibit all alcoholic beverages in Boston.2   The beginnings of temperance started then.

The first sobriety circles were formed among Native Americans. These sometimes became the bases for temperance groups.6

A health argument in favor of temperance was made by Nathaniel Ames.  In his Almanack he wrote that

‘Strong Waters were formerly used only by the Direction of Physicians but now Mechanicks and low-li’d Labourers drink Rum like Fountain-Water, and they can infinitely better endure it than the idle. unactive and sedentary Part of Mankind, but DEATH is in the bottom of the cup of every one.’7

Dr. Benjamin Rush published his famous pamphlet, Inquiry into the Effects of Ardent Spirits Upon the Human Body and Mind. He promoted drinking beer and wine instead of spirits. He also considered alcoholism to be an “odious disease.” His “cure” involved whipping alcoholics severely, blistering their ankles, bleeding them, and purging them with toxic substances. His ideas were strange to say the least. He  promoted his belief that being a black person came from an inherited skin disease. What he called negroidism was, he thought, related to leprosy. Intermarrying, Rush argued, help spread the disease. He wrote that with proper treatment a black person could be cured and made white.10 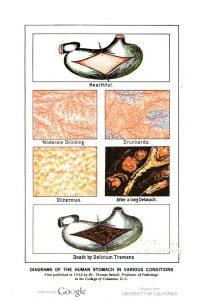 There were about one thousand temperance societies in the U.S. They had a combined membership of about 100,000.19

The beginnings of temperance usually, but not always, involved persuasion. But persuasion was too slow for many activists. So they increasingly turned to forced temperance. Actually, to forced alcohol abstinence. This was no longer temperance. Yet the name stuck.

We’ve seen the beginnings of temperance. Now let’s discover the Emergence of Temperance.