Benjamin C. Bubar, Jr., was better known as Ben Bubar. He was the Prohibition Party candidate for the presidency of the United States in both 1976 and 1980. Bubar was born on June 17, 1917, in Blaine, Maine. His parents were Benjamin Calvin Bubar and Mary Louise Heal Bubar.

He became an ordained Baptist minister, which is not surprising. His father, four brothers, and sister were all Baptist preachers. He chose not to use the title”reverend,”considering it to be pretentious. He married Virginia Ireland in 1946, They had two sons. They were Benjamin Calvin, III and Mark Ireland Bubar.

Ben Bubar was an ardent prohibitionist.

“Now, I never tell any group that the use of a little booze is the biggest sin. I have learned from experience that this calls for an argument, and I’m not here to argue. But I can tell you, without any fear of argument, that the sale and use of alcoholic beverages is leading to more sinning; it is leading to more hell-raising; is causing more heart-ache and more sorrow; breaking more hearts and more homes; it is spawning more crime and more violence; taking a bigger bite out of your tax collar, today, than most anything [else] you can name.1 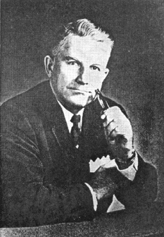 Bubar’s political career began early. On his twenty-first birthday he was elected to the Maine House of Representatives. At that time he was the youngest person ever elected to that office in Maine.

Privately, Bubar complained that the head of the party, Earl F. Dodge, wouldn’t approve funding for the campaigns. Years later, Dodge was unseated as Party chair. There had long been accusations of secrecy, mismanagement of Party funds, theft, and other problems.

Finally, Earl Dodge was removed as chair. He had held the supposed 2003 Party nominating convention in his house. Some members were not told of the meeting in advance. Others were told by Earl Dodge that they would not be admitted. Only eight people attended the “convention.” They were Dodge, his two daughters, and five Dodge supporters. The meeting violated Party by-laws and there was no quorum. The Party then ousted him.

The Prohibition Party has run candidates for the presidency and vice-presidency every year since 1876. Ben Bubar was the last of its presidential candidates to have had any political experience before running for that office.