To most people, binge drinking is a self-destructive drinking bout lasting at least a couple of days. During that time the drinker “drops out.”  The binger stops working or going to class. Ignores responsibilities. Squanders money. And does other harmful things. Perhaps fighting or having risky sex.

This view is consistent with the usage of physicians, psychologists, and other clinicians.  It is the “prolonged use and the giving up of usual activities ” that defines binge drinking.1  Without that, it’s not a binge.

Consider this. A woman has two glasses of wine with her leisurely dinner. She then sips two drinks over the course of a four or five-hour evening. In the view of most people, she would be acting responsibly. Indeed, her blood alcohol concentration would stay low. She probably wouldn’t be able to feel the effects of the alcohol. But she’s a binge drinker! At least according to the newer definition.

The new definition suddenly ‘created’ widespread binge drinking. First it was on college campuses. Then among retirees. And then in the entire population. It was now everywhere.

Bingeing was now an epidemic. This created new perceived needs. Researchers needed to study the problem. Experts needed to make recommendations. Consultants needed to present workshops. And they all needed money. Lots of it.

Alcohol researchers and activists were suddenly in demand. They became highly paid speakers. They worked as consultants.  And they investigated this new danger. Binge drinking   threatened not only to our children. It threatened the future of the country. We must act. And now.

But other researchers urged restraint. They said the new definition was misleading. Even worse. They said it was harmful to brand drinking in moderation as  bingeing.3  The New York Times noted the irony. People who follow guidelines for moderate drinking could carry the stigma of binger! 4  They could have to take unnecessary “treatment.” Or they might face punishment for normal behavior.

How useful is such an unrealistic definition? It is very useful if the intent is to inflate the extent of a problem. And it would please members of the Prohibition Party. It would also please members of the Women’s Christian Temperance Union. (Both of which still exist.) But it is useless if the intent is to describe reality to the average person.  A prohibitionist definition to describe drinking is inappropriate.

We should define binge drinking in a realistic way. Perhaps as intoxication that leads to certain harmful behaviors. Or specify the period of time during which a person is under intoxication. Perhaps we should require intoxication before labeling a “binger.”

Strong criticisms of its faults led to revisions. An example is the National Institute on Alcohol Abuse and Alcoholism (NIAAA). It now defines binge drinking as having a blood alcohol concentration (BAC) to 0.08.5   No conduct problems are necessary. There is no concern for time period. The ‘binger’ could easily be quietly enjoying an evening with friends. But at least it’s an improvement over the “new definition.”

The conclusion is clear. Be very skeptical the next time you hear about “binge” drinking. Were the people really bingeing? By any reasonable definition, most almost certainly were not. 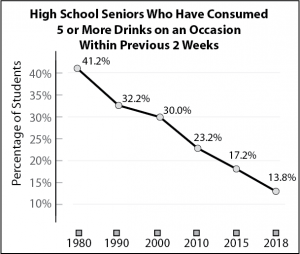 Similarly, the proportion of ‘binge’ drinking young adults one to four years beyond high school has dropped greatly since 1980.7

Adolescents in the U.S. who “binge” drank during the previous month fell 30.3% between 2008 and 2013.8  The incidence of such drinking has been below the federal government’s Healthy People 2020 target since 2010.

The facts are clear. “Binge” drinking is down. Alcohol abstinence is up This is true among both school and college students in the U.S. Yet the false impression persists that we’re suffering an epidemic of bingeing.

This misperception is dangerous. Many young people go off to college falsely thinking that “everybody” is drinking and bingeing. They are then more likely to drink and to “binge” to conform. Correcting this misperception is important. The results of surveys of actual student behavior correct misperceptions. This empowers students to abstain. Or to drink much less. That’s what most really want to do. In this way, heavy drinking drops quickly.9

Too many college students still abuse alcohol. But those who exaggerate the problem make the problem worse. They are part of the problem, not the solution. To further reduce the problem, we have to publicize the actual facts. We need to correct harmful misperceptions. This will empower students to do what they generally want to do. That is, to drink less or not drink at all.

Many people and groups have a vested interest in inflating the extent of “binge” drinking. But scare tactics are actually counter-productive. The most effective way to reduce alcohol abuse is simply to tell the truth. And to make sure young people know the truth.