Here’s what happens. Generally speaking, people tend to feel better as their blood alcohol concentration (BAC) rises to about 0.05.  Specifically, it’s 0.055 to be exact. That is the first phase or part of the biphasic curve.

If people drink more and their BAC rises above .055, the negative effects of drinking increase and hangovers become worse. Problems associated with drinking too much increase. That is the second phase. So it’s clearly smart to stop during the first phase and not progress into the second phase. 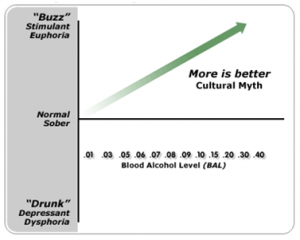 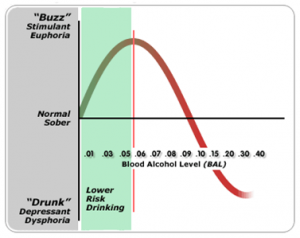 On the whole, how much does it take to reach a BAC of about .05? The following charts provide guidelines. However, gender, speed of drinking, food eaten, and some medications effect BAC.

How to Maintain a Moderate BAC

Here are some hints for maintaining a moderate blood alcohol concentration.

Needless to say, drinking too much alcohol is never a good idea.

Dasgupta, A. The Science of Drinking. How Alcohol Affects Your Body and Mind. Lanham, MD: Rowman & Littlefield, 2012.

Michael, E. Moder8: Balance for a Better Life. How to Control Your Drinking and Learn to Drink in Moderation. Michael, 2012.

Poikolainen, K. Perfect Drinking and Its Enemies. Minneapolis: Green, 2014. And

Turner, C. Can I Keep Drinking? How You can Decide When Enough is Enough. NY: Morgan James, 2017.

Technical Articles on the Biphasic Curve