The Board of Temperance Strategy was established 1930 by the Anti-Saloon League. It was a “last ditch” effort to coordinate resistance to the growing public demand for Repeal. That is, to repeal National Prohibition (1920-1933). 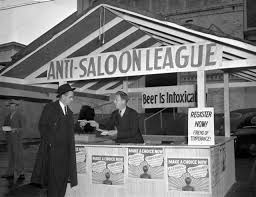 Opposition to Prohibition had been rising in the late 1920s. That’s because more and more people thought it was causing many serious problems.

The Board of Temperance Strategy consisted of representatives from an impressive list of 33 major temperance groups.

Many prominent people had financially supported the Anti-Saloon League. They included John D. Rockefeller, Jr. and Henry Ford. However, many became disillusioned with Prohibition. Not only that, but they publicly called for Repeal. Most of the public agreed.

The Democratic Party platform in the 1932 election included an anti-prohibition plank. In addition, Franklin Roosevelt ran for the presidency promising Repeal.

Repeal occurred on December 5, 1933. The popular vote for Repeal was three to one. Specifically, it was 74% in favor and 26% opposed. In fact, only two states opposed Repeal.

Neither the Anti-Saloon nor the Board of Temperance Strategy had failed. Prohibition had failed and done so miserably. And most people had come to realize it.

Surprisingly, many people and organizations today support neo-prohibition ideas. They also strongly defend the many remainders of Prohibition that still remain.

Resources on the Board of Temperance Strategy: