In the cell phone vs drunk driving battle, which is more dangerous? 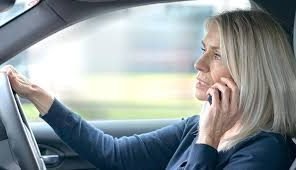 Dr. Frank Drews and his colleagues at the University of Utah decided to find out. So they conducted an experiment. Spoiler alert! Drivers who talk on either handheld or hands-free cellular phones are as impaired as drunken drivers.

“If legislators really want to address driver distraction, then they should consider outlawing cell phone use while driving.” says Dr. Drews.

This controlled laboratory study included 25 men and 15 women ages 22 to 34. They were social drinkers (three to five drinks per week) recruited via newspaper advertisements. Two-thirds used a cell phone while driving. The study paid each participant for their 10 hours in the study.

Each study participant drove the simulator during three sessions. They were (1) undistracted, (2) drunk, or (3) talking to a research assistant on a cell phone. Each was on a different day.

The simulator recorded driving speed, following distance, braking time and how long it would take to collide with the pace car if brakes were not used.

The researchers used a device to measure blood-alcohol levels.

The study found that compared with undistracted drivers:

Drivers drunk at the 0.08 blood-alcohol level

Neither accident rates, nor reaction times to vehicles braking in front of the participant, nor recovery of lost speed following braking differed significantly.

The lack of accidents among the study’s intoxicated drivers may have been because it was conducted in morning hours when participants were well rested. However, most drunken driving accidents occur late at night when drivers are fatigued and their average blood alcohol content (BAC) levels are also twice the legal .08 level used in the research.

“Fortunately, the percentage of drunk drivers at any time is much lower.” said Dr. Drews. “So it means the risk of talking on a cell phone and driving is probably much higher than driving intoxicated because more people are talking on cell phones than driving while drunk.”

Cell phone users are about 5.36 times more likely to get in an accident than undistracted drivers. Other studies have shown the risk is about the same as for drivers with a 0.08 blood-alcohol level.

The researchers are not trivializing drunken driving. They oppose both driving while intoxicated or while using a cell phone.

The Federal Aviation Administration supported the study. It’s interested in impaired attention among pilots. Human Factors: The Journal of the Human Factors and Ergonomics Society published the report.

We Save Lives: Drugged, Distracted, and Drunken Driving.