The Committee of Fifty for the Investigation of the Liquor Problem was formed to study Scientific Temperance Instruction.

As the end of the 1800s approached, Scientific Temperance Instruction was widely required by law. Virtually every state, the District of Columbia, and all U.S. possessions requierd it. Specifically, each had strong laws mandating that every student receive anti-alcohol education.

However, the content of the Scientific Temperance Instruction was anything but scientific. The textbooks endorsed by the Woman’s Christian Temperance Union (WCTU) were not scientific. Indeed, they were propaganda. Yet textbooks lacking WCTU endorsement also lacked markets.

Books endorsed by the WCTU reflected a specific view. It was that that “any quantity of alcohol in any form was toxic.”  And also that “when consumed regularly [it] produced inheritable disorders into the third generation.”2 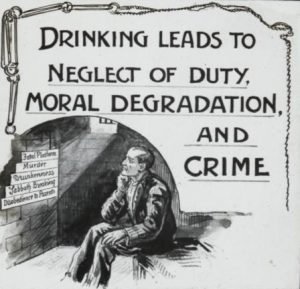 One such textbook asserted as “scientific” the idea that:

sometimes one is sick or suffers very much because of wrong things that his parents or grand-parents did…. Over in the poor- house is a man who does not know as much as most children four years old … because he is the child of drinking parents whose poisoned life blood tainted his own.

Many men and women are insane because they inherit disordered bodies and minds, caused by the drinking habits of their parents; and the descendants of “moderate drinkers” differ in this way as well as those of the drunkard…. This is called the law of heredity … one of God’s laws, and just like earthly laws, helps right living and punishes those who disobey.3

Another approved textbook asserted that “One of the most destructive agents man has brought into use is alcohol.” It explained:

It has often been observed that children of intemperate parents frequently fail to develop into manhood or womanhood. They may not be deformed, but their growth is arrested, and they remain small in body and infantile in character. . . . Such are examples of a species of degeneracy, and are evidences of the visiting of the sins of the fathers upon the children, which may extend even into the third and fourth generations.4

By the early 1890s, leading scientists and educators were criticizing textbooks endorsed by the WCTU. Scholars objected to their extensive exaggerations, distortions, and gross inaccuracies. i Critics included the presidents of Columbia, Cornell, Yale, Stanford, and Vassar.

A subcommittee found the WCTU’s program of temperance instruction seriously defective. The committee contended that children should not be taught and forced to memorize “facts” that they would later find to be incorrect. This instructional approach was seen as inappropriate and doomed to backfire.

“Alcohol is a Poison” 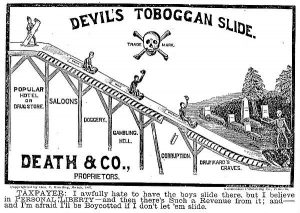 By making such unqualified assertions as “Alcohol is a colorless liquid poison,” the WCTU-approved textbooks clearly conveyed the false impression that alcohol is poison in any amount and is always harmful.7 By constant repetition of the word poison and by making numerous exaggerations and false statements, the approved texts attempted to mislead and frighten young people into abstinence.

The Committee of Fifty believed that instruction should be based on facts so that students could form their own educated opinions.

They “should not be taught that the drinking of a glass or two of wine by a grown-up person is very dangerous.”8

This was diametrically opposed to the view expressed by a prominent WCTU leader.  She said “To teach the danger of forming the awful, insidious, inexorable appetite [for alcohol], is the especial province of the teacher.”9

Mary Hunt originated and promoted Scientific Temperance Instruction. She was also the one who gave WCTU approval to textbooks. As a result Ms. Hunt was one of the most powerful women in the temperance movement.

Hunt warned of the enormous “harvest of death that might result from the universal teaching that the drinking of one or two glasses of wine is not ‘very dangerous.'” She insisted that “such teaching would be nothing less than crime.”10

The investigating committee conducted a survey of all members of the American Physiological Society (APS). Also of 45 physiologists, hygienists, and specialists in allied sciences holding prominent positions abroad.

The goal was to “obtain valuable expert opinions from practically the entire scientific world” regarding Scientific Temperance Instruction.11

A number of the scholars opposed the consumption of alcohol. Nevertheless, every respondent from the APS except one opposed Scientific Temperance Instruction. The strong conviction of a number was that it resulted  “in more evil than good.”12

Of the foreign scientists, only one reported being in support of the approved textbooks. Even Dr. Auguste Forel, who believed that alcohol in all doses is a poison, opposed them. He wrote “I think that in America somewhat unwise methods have been adopted.”13

The committee expressed concern over the ideological and propagandistic of the Scientific Temperance Instruction movement. 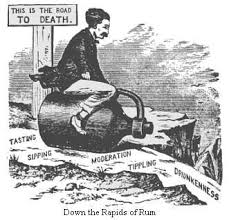 As is generally the case when feeling and prejudice run high, the temptation has been irresistible to either manufacture evidence or stretch it over points that it does not cover. To call “scientific” everything that happens to agree with [its] particular prejudices, and to relegate to the limbo of human error all the evidence that appears for the other side.14

The committee extensively documenting “‘scientific temperance’ propaganda.”15 It noted that “It is little wonder that educators and teachers oppose ‘scientific’ temperance.”16 That’s because “the text-books are written with a deliberate purpose to frighten the children, the younger the better, so thoroughly that they will avoid all contact with alcohol.”17

Indeed, a “study of what children actually remembered from their [Scientific Temperance Instruction] physiology classes reported one pupil’s response.” Alcohol “will gradually eat away the flesh. If anyone drinks it, it will pickle the inside of the body.”18

The committee attempted to use contemporary social scientific methods to study alcohol and to avoid the moralism of the prohibitionists.

It concluded three things. One, that regular moderate drinking did not cause health problems. Second, that drinking did not inevitably lead to drunkenness. Third, that alcohol education should be based on a recognition that “Intoxication is not the wine’s fault, but the man’s.”19

The committee was clearly displeased about “the manner in which scientific authorities are misquoted in order to appear to furnish support to ‘scientific temperance instruction.'”20

The committee reviewed the results of three studies of Scientific Temperance Instruction practice and outcomes. It made the following observation.

Scientific Temperance Instruction “is neither scientific, nor temperate, nor instructive.”21

Mary Hunt prepared a Reply to the Physiological Subcommittee of the Committee of Fifty. She charged the authors of the report with being prejudiced against abstinence instruction.

Hunt also blasted them for what she insisted were gross misrepresentation of facts. She argued that alcohol was a dangerous drug. And she insisted that the WCTU-endorsed textbooks were completely accurate.

Hunt then had the Reply entered into the Congressional Record22 and distributed more than 100,000 copies.23

Surprisingly, in spite of the dismal failure of Prohibition and the serious problems it created, many people and organizations today support neo-prohibitionist ideas. They also strongly defend the many vestiges of Prohibition that continue.

References: Committee of Fifty for the Investigation of the Liquor Problem

Resources on the Committee of Fifty