Social norms clarification is based on a simple set of facts.

The social norms approach begins by conducts anonymous surveys on a campus. Ideally, most people on the campus complete the survey. This increases student confidence in the results. 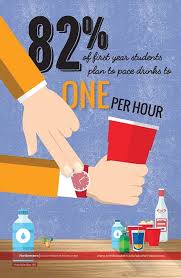 Educators then tally the results. They select several important positive statistical facts about the campus. Perhaps “When they drink, 7 out of 10 students on campus have only one drink.” Or “22% of our students choose not to drink alcohol.”

Next they widely and intensively publicize or “market” the facts. The approach is effective in increasing abstinence, decreasing drinking, and lowering alcohol-related problems. As if that wern’t enough, it’s inexpensive to implement and the positive results occur rather quickly. Yet there are criticisms of social norms marketing.

Some people have a vested interest, usually emotional or financial, in doing things the old way. And even when they don’t work. Some of these people have become vocal critics of the new approach. Dr. William DeJong is a leading expert in alcohol education. He observes that 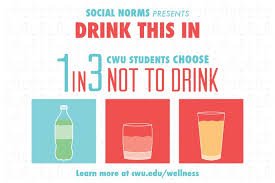 The alcohol industry, according to some critics, seeks to downplay the seriousness of campus alcohol problems, and social norms marketing provides a vehicle for doing that. This concern was heightened by a front-page story on social norms marketing in The New York Times summarized in its headline. “New Tactic on College Drinking: Play It Down.” In addition, some critics say, these campaigns appear to condone, and perhaps even to normalize, underage drinking on campus, which serves the alcohol industry’s economic interests. 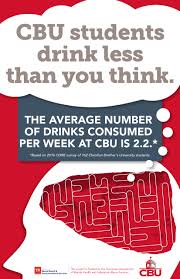 In fact, the Times headline is misleading. Social norms marketing is not about downplaying the problem, but portraying it accurately. If most students on campus abstain or use alcohol in moderation, doesn’t the campus community need to know that? If putting the emphasis on this good news can help build social pressure to avoid heavy drinking, shouldn’t that be done?

Using social norms marketing doesn’t mean sweeping the problem under the rug. The problem is severe enough without exaggerating it. Every major social problem on campus is made worse by alcohol abuse.

Do social marketing campaigns condone or normalize underage drinking? Consider a typical print advertisement for the University of Arizona’s campaign, which had led to a sizeable reduction in heavy drinking. There is a photograph of smiling students, along with the following headline: “64% of U of A students have 4 or fewer drinks when they party.”

This message is a statement of fact about what most students are doing, not what they should do. Even so, does the advertisement imply that it’s okay for all students, no matter what their age, to drink alcohol?

To understand what this advertisement actually communicates, we need to remember that college and university students of all ages already think that an even higher level of alcohol consumption is normative. Many University of Arizona students once believed that most students have 8, 9, 10, or more drinks when they socialize. And this misperception incited heavy drinking. Hence, for underage students, the revelation of this message was not that other undergraduate students drink. But that they drink so much less than students thought. By implication, the message censures heavier drinking as a socially unacceptable choice. 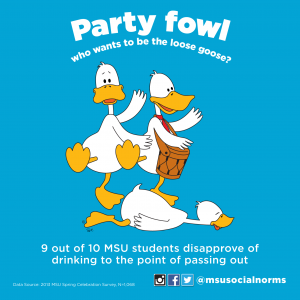 Will some students who abstain or are light drinkers be led by social norms marketing to drink more than before? It’s important to remember that these students, absent a social norms campaign, will also have an exaggerated view of how much drinking is going on around them. This perception is pervasive. Nonetheless, in the face of this apparent normative pressure, these students still choose to abstain or drink lightly. It’s implausible to think they would increase their drinking after learning there are fewer heavy drinkers than they had once thought.

Making changes for the better often meets resistance. The introduction of automobiles encountered fear, resistance, and even sabotage. Buggy whip makers were especially vocal in their opposition to the horseless carriage. In the 1920’s ice manufacturers convinced many people that electric refrigerators produced “unnatural” cold air that was inferior to that produced by ice.

People often defend what they think is in their own self-interest. So it is not surprising that, in spite of it’s effectiveness and ease of implementation, some people still oppose social norms marketing.