It’s a simple fact. In general, alcohol drinkers make more money. As one newspaper reported, “Who said boozers are losers? Just take a look at their paychecks.”

Research by economist Dr. Christopher Auld of the University of Calgary found that Canadian men who drink alcohol earn about 10% more than do abstainers. His study controlled for age, education, occupation, region and health.

Research in several other countries also finds that those who drink earn more money. For example, men in The Netherlands who drink alcohol in moderation are likely to earn 10% more than their abstaining counterparts.

One explanation is that moderate drinking improves health, which in turn affects earnings.

Researchers in the current study tested the idea that drinking increases social capital, which leads to greater income. Social capital refers to a person’s social characteristics. Specifically, sociability factors that enable the person to reap both economic and non-economic returns from interactions with others. These include such things as skills, charisma, number of friends and acquaintances, and so on.

There is strong evidence that social networks are important in finding jobs and earning promotions. A large number of friends-of-friends may be the most important factor in getting the best job and highest income. 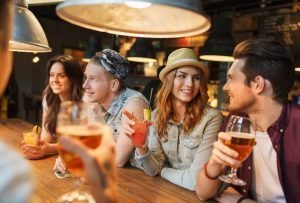 Moderate drinkers have the strongest social networks. There is also a negative relationship between social integration and abstinence. The researchers note that “Whether abstainers choose not to be as social or whether organizers of social functions involving drinking exclude abstainers in unclear. Abstainers may prefer to interact with other abstainers or less social people. Alternatively, abstainers might not be invited to social gatherings, work-related or otherwise because drinkers consider abstainers dull.”

It appears that people make more money because they drink. Research conducted by Dr. Pinka Chatterji of Harvard and Dr. Jeffrey DeSimone of the University of South Florida demonstrates that higher income is not leading to drinking.

That is, the larger proportion of higher income people who drink isn’t because they can afford to do so. Their research was funded by the National Institute on Alcohol Abuse and alcoholism (NIAAA).

Of course, there can be too much of a good thing. The economic advantage of drinking dissappears when consumption exceeds 35 drinks per week.