Alcohol and gallstone disease. Are they related? Yes. Drinking alcohol reduces the risk of developing gallstone and gallbladder disease.

I. Research on Alcohol and Gallstone Disease

Here is some of the research.

• Researchers followed 1,290,413 women in the UK for over six years. Drinking reduced the risk of developing gallstone disease. Those who had 15 or more drinks weekly had a 41% lower risk.  That’s compared to those who had one to two drinks weekly.1

• Researchers followed 88,837 women aged 34 to 59 for four years. They then analyzed the resulting data. Drinking alcohol and gallbladder disease were linked. Specifically, those who drank daily had a 40% decreased risk of gallbladder disease.3 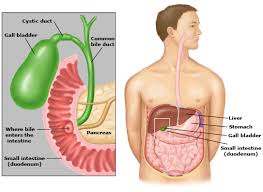 • Researchers followed 80,898 women in the U.S. for 20 years. As drinking increased, risk of gallstone disease decreased. Compared to abstainers, women who consumed up to one drink daily had a 14% decrease in risk. Those who drank an average of four or more drinks per day had a 38% reduced risk. And increased frequency of drinking greatly decreased risk.5

• Investigators conducted a meta-analysis of observational studies of alcohol and gallstone disease. They analyzed data from eight cohort and 10 case-control studies. Higher alcohol consumption went with with lower risk of gallstone disease among both men and women.6

The gallbladder is a small pouch-like organ under the liver on the right side of the body. It’s about three to six inches long. It produces a liquid (bile) that mostly helps digestion.

Gallstones are small lumps of solid material. They may consist of (1) cholesterol, (2) mostly calcium, or (3) both. Gallstones can range in size from grains of sand to pebbles. They form from imbalances in the bile.

Gallstones may cause no problem. But when they do, they cause pain.

If there are complications of the disease, any of these symptoms may occur.

The health benefits of beer, wine, and distilled spirits are generally the same.