The subject of drinking alcohol and type 2 diabetes is important to many diabetics. About six percent of the U.S. population suffers from the disease. Tens of millions of people around the globe have diabetes. Many more are at risk.

I. About Type 2 Diabetes

Type 2 diabetes is a very serious disease. It’s especially harmful to the kidneys, nerves, and eyes. It can lead to problems such as blindness, impotence, loss of limbs, and death. The disease also increases the risk of heart disease and stroke.

The American Diabetes Association reports that common symptoms of diabetes include these.

Some people have symptoms that are so mild that they go unnoticed. If in doubt, see a doctor.

Fortunately, the moderate consumption of alcoholic beverages  reduces the risk of developing diabetes. The alcohol can be in the form of beer, wine, liquor or distilled spirits. Spirits include whiskey, tequila, rum, vodka, gin, etc.

Moderate drinking is beneficial for type 2 diabetes. The evidence is overwhelming.

A. Reviews of Research

This meta-analysis examined the dose-response relationship. That is, the relationship between amount of alcohol consumed and the degree of risk reduction. 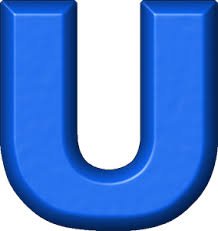 There was a clear U-shaped curve between drinking alcohol and type 2 diabetes risk. The lowest risk was among both men and women who had an average of about two drinks per day. Alcohol reduces the risk of diabetes. And it does so greatly.1

An analysis of 20 longitudinal cohort studies looked at alcohol and type 2 diabetes risk.

Investigators compared drinkers at different consumption levels to lifetime abstainers. This was to eliminate any possible “sick-quitter” effects.

Lifetime abstainers and heavy drinkers had the greatest risk of developing type 2 diabetes. Women who had an average of two drinks per day had a 40% reduction in risk for the disease. The beneficial effects of drinking alcohol continued for up to three drinks daily for women.

For men, the risk of type 2 diabetes was lowest among those who consumed about one and one-half drinks daily. The benefits continued for up to four drinks per day.2

Medical researchers examined the results of 15 different prospective studies. They reported that moderate drinkers were less likely to develop type 2 diabetes than abstainers. Teetotalers and heavy drinkers had equally high risk of the disease.

The 15 studies were in the U.S., Japan, Finland, Korea, the Netherlands, Germany and the UK. They followed a total of 369,862 men and women for an average of 12 years.

Moderate drinkers were those who drank between about a half a drink to four drinks per day. They were 30% less likely to develop type 2 diabetes than abstainers or heavy drinkers.

The pattern of alcohol consumption made a difference. It was much better to drink often (such as daily) rather than infrequently for maximum benefits.3

Review of the Literature

Investigators made a major review of the epidemiological evidence regarding women. They reported that drinking moderate amounts of alcohol contributed significantly to reducing the risk of developing type 2 diabetes. The disease is a major risk factor for cardiovascular disease. That’s the leading cause of death among women in the United States.4

Pre-menopausal women who consume a daily drink had a much lower risk of developing type 2 diabetes than abstainers. The study duplicates similar findings in men. The Harvard study involved about 110,000 women age 25 to 42 over a ten-year period. Dramatic reductions (about 60%) occurred among women who drank between 1/2 and two drinks daily compared to abstainers. The reduction of risk was lower for those who drank less.5

Another Harvard study followed 41,810 men 40-75 years of age over a period of six years. It controlled for known risk factors. Men who drank higher amounts of alcohol had a reduced risk of diabetes.

Compared to abstainers, men who drank two to three drinks per day experienced a 39% reduced risk of diabetes. In short, moderate alcohol consumption significantly reduces the risk of type 2 diabetes.6

Researchers studied pairs of twins with different drinking patterns. Those who consumed alcohol in moderation had half the risk of developing type 2 diabetes compared to those who drank less. The study involved nearly 23,000 Finnish twins.7

A study followed almost 21,000 male physicians for over 12 years. Those who were light to moderate drinkers had a lower risk of type 2 diabetes.8

A study followed 8,663 men over a period of as long as 25 years. The incidence of type 2 diabetes was significantly lower among moderate drinkers than among either abstainers or heavy drinkers. These findings persisted after adjusting for possible confounders. They include age, smoking, blood pressure, HDL cholesterol, waist circumference, parental diabetes, and fasting plasma glucose. Also body mass index (BMI), serum triglyceride concentration, and cardiorespiratory fitness.9

A population-based study followed more than 4,000 diabetic and non-diabetic Japanese men for 19 years. It compared the effects of drinking alcohol on both cardiovascular and all-cause mortality .

Moderate drinkers had lower cardiovascular and all-cause mortality. This was true for diabetic, non-diabetic and impaired glucose tolerant men.

The decrease in cardiovascular and all-cause death rates with moderate drinking was even greater among diabetics than non-diabetics.10

Research at the University of Padova Medical School in Italy looked at alcohol and type 2 diabetes. It found that consuming alcohol directly improved the action of insulin in healthy diabetics. Alcohol also improved fatty acid levels.11

Middle-aged men participated in a randomized diet-controlled experimental study. It reported that moderate alcohol consumption (four drinks of whiskey per day) improved insulin sensitivity in relatively insulin-resistant subjects. They reported that these findings are consistent with observational studies.12

The New Mexico Elder Health Survey is a cross-sectional community one. Researchers reported that alcohol abstainers  appear to be more insulin resistant than daily moderate drinkers. Their conclusion? This difference in insulin sensitivity may explain the lower prevalence of diabetes in drinkers compared with abstainers.13

Metabolic Syndrome refers to a dangerous cluster of conditions that can lead to diabetes and heart disease.

Researchers at Boston Medical Center analyzed data from 8,125 participants in the Third National Health and Nutrition Examination Study. They found that drinkers had a 43 percent lower chance of having Metabolic Syndrome than did non-drinkers.14

Non-diabetic postmenopausal women can reduce insulin concentrations and improve insulin sensitivity by consuming alcohol in moderation. This was reported by nutrition researchers at the U.S. Department of Agriculture . 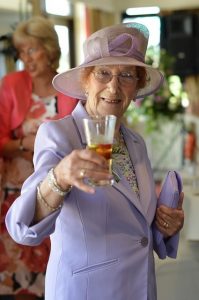 Women age 40-70 who drank alcohol in moderation had a much lower risk of developing type 2 diabetes. The large study in the Netherlands followed them for an average of over six years. The “findings support the evidence of a decreased risk of type 2 diabetes with moderate alcohol consumption. It expands this to a population of older women.”16

Hyperglycemia is the leading factor linked with the development of diabetes.

This study confirms that the protective effect of drinking alcohol also applies to obese persons as well.17

The Diabetes Prevention Program examined alcohol and type 2 diabetes among pre-diabetics.  It did so at 27 centers throughout the U.S. The prospective study followed 3,175 pre-diabetic patients. The Program randomly assigned them to experimental and control groups. It then followed them for over three years.

This large study found that drinking alcohol in moderation may improve insulin secretion. Thus, drinking would prevent the progression of pre-diabetes to diabetes.18 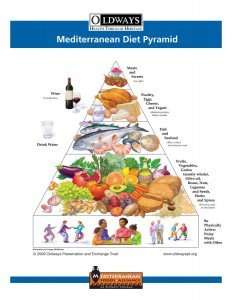 Researchers wanted to know which parts of a Mediterranean Diet most reduced death risk in type 2 diabetes patients. So they scored each of its components.

A total of 1,995 type 2 diabetes patients were followed for four years. Those who more closely followed the Mediterranean Diet were less likely to die during the period.

This information was used to estimate the most important parts of the Mediterranean Diet in promoting longer life. The most valuable was drinking wine in moderation.19

(U.S. guidelines identify one drink per day for women and two drinks per day for men as moderate drinking. This study defines having between about two and four drinks per day as light to moderate. It finds these levels provide health benefits. Official government guidelines are somewhat arbitrary. That’s because they are molded by social and political forces.

Clearly, moderate drinkers have a much lower risk of type 2 diabetes than abstainers. Heavy drinkers have an increased risk. It’s as high as that of abstainers. The pattern has the shape of the letter U. But does the U-shaped risk pattern apply to wine, to beer, and to spirits. In other words, does the form of alcoholic beverage matter?

Researchers conducted a meta-analysis to answer this question. It included 13 prospective studies. Each study examined the effects of specific types of alcoholic beverage on the risk of type 2 diabetes. Together, they provided data on 397,296 study participants and 20,641 cases of the disease.

The meta-analysis found the U-shaped risk pattern for wine, for beer, and for spirits. Thus, the moderate consumption of any or all of these beverages reduces the risk of IV. developing type 2 diabetes.21

The health benefits associated with drinking in moderation are also similar for beer, wine and spirits. The primary factor associated with health and longevity is the alcohol itself.

These books don’t focus on alcohol and type 2 diabetes. Instead, they do two things. First, they provide information about type 2 diabetes. Second, they answer questions and provide guidance on managing the disease.

The Mediterranean Pyramid by permission of Oldways.