There is strong evidence that the moderate consumption of alcohol reduces kidney cancer (renal cell carcinoma) risk. The alcoholic beverage can be beer, wine or distilled spirits (liquor).

A number of things increase the risk of kidney cancer.

These are some common symptoms of kidney cancer.1

There are also less common symptoms.

Research repeatedly shows that the moderate consumption of alcohol reduces kidney cancer risk. Some of this research is summarized below. 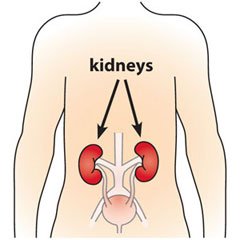 1. Doctors analyzed the results of 12 prospective studies of 760,044 men and women. (A prospective study follows participants over time.) The analysts found that “moderate alcohol consumption was associated with a lower risk of renal cell cancer.”1

2. Researchers studied 88,759 women for 20 years. They also studied 47,828 men for 14 years. In comparison with non-drinkers, alcohol consumers had a much lower risk of developing renal cell cancer.2

3. Investigators studied the 120,852 participants in the Netherlands Cohort Study (NLCS) on Diet and Cancer for over 11 years. People who drank beer, wine, or distilled spirits had a decreased risk of kidney cancer.3

4. Epidemiologists studied 59,237 women in Sweden. Drinkers had a  reduced risk of developing kidney cancer. Those who had at least one drink per week enjoyed a 38% lower risk of renal cell carcinoma. That’s in comparison with those who drank less or who abstained. In additioin, for women over age 55, the risk of kidney cancer dropped by two-thirds (66%) among drinkers.4

5. Researchers followed 34,637 women in Iowa for over 15 years. In comparison to alcohol abstainers, women who drank alcohol daily had a 48% lower risk of developing kidney cancer.5

6. Doctors followed a large group of Finnish male smokers was for 12 years. Drinkers who consumed more alcohol had lower risk of developing renal cell cancer. For example, those in the top one-fourth of consumption had a 47% reduced risk of kidney cancer.6 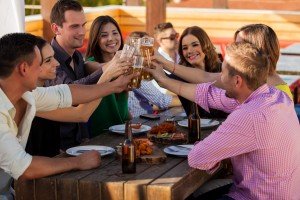 8. Investigators made a study of 161,126 participants in the Hawaii-Los Angeles Multiethnic Cohort. They followed them for 8.3 years. Men who had one or more drinks daily had a 31% lower risk of developing renal cell cance than abstainers. There were too few women who drank and developed the disease to analyze.8

9. Doctors studied 1,065 incident kidney cancer cases and 1,509 controls in Russia, Romania, Poland, and the Czech Republic. Those in the upper 10th percentile of total alcohol consumption had a 61% reduced risk of developing the disease. That’s in comparison with those in the lowest decile. However, those with lower levels of consumption did not experience a reduced risk.9

10. Researchers made a study of 315 renal cell carcinoma patients, 313 hospital and 336 population controls in Oklahoma. They found that those who had consumed alcohol had a lower risk of kidney cancer.10

11. Investigators made a study of 406 people with renal cell carcinoma. They compared them with 2,429 controls randomly selected from the general population of Iowa. Women who had more than three drinks weekly (the median among drinkers) had a 50% reduction in risk. That’s in comparison with never drinkers. The investigators did not find protective effect for men.11

12. Researchers made a study of Swedish men and women aged 20-79 years. It consisted of 855 cases of kidney cancer and 1,204 controls. Those who drank alcohol in moderation had a 40% reduced risk of developing renal carcinoma. The investigators found the lower risk amonong beer, wine and spirits. They concluded that “alcohol itself rather than a particular type of drink is responsible for the reduction in risk.”12

13. Doctors made a hospital-based study of 267 men and women with kidney cancer. The doctors compared them with and an equal number of matched controls in six U.S. cities. Alcohol drinkers had a 40% reduced risk of developing kidney cancer. That’s in comparison with those who did not drink alcohol.13

14. Other doctors studied 196 cases of kidney cancer and 347 controls in France. They found no relationship between any of the variables studied and the disease. They examined the number of cigarettes smoked per day, duration of smoking, and early age at first cigarette smoking. Also  the consumption of regular coffee, decaffeinated coffee, tea, and alcohol. However. most studies find that tobacco use significantly increases risk of kidney cancer. This is also surprisingly failed to find that alcohol reduces kidney cancer risk.14

15. Researchers studied 477,325 men and women. To do so, they followed them over an eight-year period. Moderate drinkers of alcohol had a much lower risk of developing renal cell carcinoma.

A standard alcoholic drink is a

Standard drinks contain equivalent amounts of alcohol. To a breathalyzer, they’re all the same.

There is no evidence that any particular form of alcoholic beverage  gives greater health benefits than any other. That is, beer, wine, and distilled spirits appear overall to be roughly equally beneficial.

Nat Canc Inst. What You Need to Know about Kidney Cancer. Bethesda: The Inst, 2010.