Drinking and driving while either impaired or drunk is dangerous. Drivers with high blood alcohol concentration (BAC) are at much greater risk of traffic crashes. Thus more injuries and deaths.

I. The Problem: Drinking and Driving

Every single injury and death caused by drunk driving is preventable. In fact, the proportion of alcohol-impaired driving crashes has dropped greatly over time.

But there are still far too many such crashes. So in spite of great progress, alcohol-impaired drinking and driving remains a serious problem. It tragically effects many victims and their families annually.

It’s all too easy to forget that statistics refer to real flesh and blood people. Therefore, this page is dedicated to a grandfather and his three grandchildren. They were all killed by a drunk driver. Family and friends deeply mourn their needless and tragic deaths.

II. Facts about Drinking and Driving. 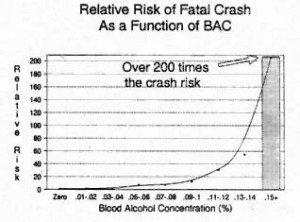 Most drivers who have had something to drink have a low BAC. Yet few have fatal crashes. Only a few drivers have BACs higher than 0.15.

However, the risk of death from drinking and driving escalates with BAC. And it does so greatly. Over two-thirds of alcohol-related traffic deaths involve a driver with a BAC over 0.15.1

High BAC drivers are more likely to be male and aged 25-35. Also, they often have a history of DWI convictions and drug abuse.

Possible prevention measures include these, among many others.

Solutions for Reducing Drinking and Driving.

Alcohol-impaired drinking and driving resists simple solutions. However, there are a number of actions that could contribute to reducing the problem.

Technological improvements include raised lane markers, which are easier to see. They also make a startling sound when a tire wanders over them. Similarly, corrugations along the edges of roads make a sound when driven over. This alerts inattentive drivers.

Other cost-effective improvements can save lives. They include wider roads, improved street and highway lighting and break-away sign posts.

Improvements in vehicles include brake lights at eye level, door crash bars, and many computer-assisted features.

We need to evaluate all of these very promising measures. This would determine their effectiveness.

Measures of Little or No Value.

We can do it! While we must do even more to reduce drunk driving, we have already accomplished a great deal.

We can and must do even better.

Above all, never drive if you, or anyone else, thinks that you may have had too much to drink. And don’t let anyone else. That includes reporting drivers who appear drunk. It’s always safest not to drink and drive. So use a Designated Driver.

People well know the dangers of drinking and driving. But often overlooked are two other major traffic safety problems. Drugged driving is one. While the other is distracted driving. These may now account for even more deaths than drunk driving.

MADD founder Candace (Candy) Lightner formed We Save Lives.  It focuses on all of the three Ds. That is, Drunk, Drugged, and Distracted driving.

Studies have looked at drivers stopped for erratic driving, involved in a crash, or killed in a crash. Over one-third had at least one drug in their bodies.  In addition, many were under the influence of both drugs and alcohol.21

Surveys report a large increase in drugged drivers over a seven year period. (On the other hand, those with alcohol in their blood dropped by almost one-third during the period.)22

At any moment during daylight, about 660,000 drivers in the U.S. are using an electronic device. A total of 421,000 people in a recent year were injured in crashes involving a distracted driver. Thousands died.23 And the problem continues to get worse.