Drinking patterns generally change over the life cycle. But exactly how do they change? How consistent are they?  Do drinking patterns differ between men and women and, if so, how? 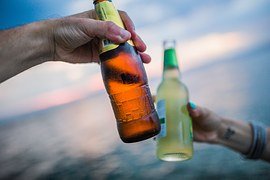 The goal of this study was to determine typical drinking patterns over the life cycle. It analyzed data from nine prospective cohorts in the U.K. Each had at least three repeated measures of alcohol consumption by individual participants.

The total sample size was 59,397. It included 174,666 individual observations. The data spanned the life cycle from adolescence to over the age of 90.

Among men, average drinking rose sharply during adolescence. It then peaked around the age of 25 and then declined and plateaued during mid-life. Finally, it began declining from About age 60.  A similar pattern was found for women but with substantially lower overall consumption. Peak consumption for men was 20 units per week and for women it was around seven to eight units per week.

Total quantity of alcohol consumed declined during the life cycle. But drinking daily or on most days of the week increased during mid to older age. This drinking pattern was especially the case among men.

Other research has found that drinking frequently is important to maximize the health benefits of moderate drinking.

Alcoholic Beverage Consumption in the U.S.: Patterns and Trends

Fillmore K. Prevalence, incidence and chronicity of drinking patterns and problems among men as a function of age. Br J Addict. 1987, 82:77-83.