I. Impact of BAC on Traffic Crashes.

What’s the effect of BAC on traffic crashes? (BAC = blood alcohol concentration.) Most drivers who have any alcohol in their bodies have a low and legal BAC. As a result, they have few alcohol-related crashes.

The chart below shows BAC in relation to risk of crach. Clearly, the chances of a crash rise sharply as the BAC goes beyond 0.11 or 0.12. In fact, over two-thirds of alcohol-related traffic deaths involve a driver with a BAC over 0.15. 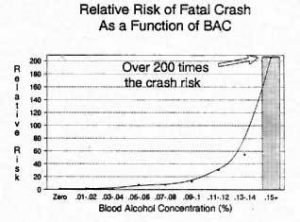 As a result, many states have laws either permitting or requiring stronger punishments for drivers with high BACs. These sanctions may include longer imprisonment, higher fines, use of interlocks, longer license suspensions, etc. These often begin with BACs of 0.10 or higher.

Although alcohol-related traffic deaths have dropped greatly, even a single death is a tragedy. Therefore, this page is dedicated to the memory of a randomly selected victim of a drunk driver. It’s Krystil Kincaid. Her grieving children, husband, and other family members mourn her death. Learn more in the Resources section.

This provided a natural experiment to test the effectiveness of a lower BAC on traffic crashes. Researchers studied both crashes and alcohol purchases after the change. To do this, they compared these in Scotland, England, and Wales.

Here’s what they found after the reduction in Scotland.

Mothers Against Drunk Driving (MADD) strongly supported lowering the legal BAC. It insisted that lowering it from 0.10 to 0.08 would cause a dramatic drop in traffic deaths. Unfortunately, it did not. However, arrests for DWI and DWI did increase greatly.

DWI and DUI Courts are Effective.

Haghpanahan, H., et al. An evaluation of the effects of lowering blood alcohol concentration limits for drivers on the rates of road traffic accidents and alcohol consumption. A natural experiment. The Lancet. DOI: 10.1016/S0140-6736(18)32850-2

Krystil Kincaid’s husband widely posted photos to raise awareness. The driver of the other vehicle was arrested and charged with gross vehicular manslaughter while intoxicated.

Please don’t drive while impaired by any substance.