Ella Boole (Ella Alexander) was born in 1858 into a prosperous family in Ohio. From the College of Wooster she received both a bachelor’s and a master’s degree. During her college education she developed strong skills in public speaking.

She married a prominent Methodist minister, William Boole. He  was active in temperance work. Appropriately, they lived in Prohibition Park on Long Island, New York. Influenced by her husband, Ella Boole joined the Woman’s Christian Temperance Union (WCTU) in 1883. She then skillfully and effectively organized new groups or unions.

Ella Boole advanced rapidly. In 1891 she became vice-president of the New York State WCTU. Several years later she became president of the state union. She held that leadership position until 1925. The exception was a six-year period (1903-1909). During that time she promoted temperance as an officer in the Presbyterian Church home mission program. Ella Boole worked to obtain the prohibition of alcohol in military installations, Indian reservations, and government buildings.

Boole campaigned to be a Presidential Elector in New York state in 1916 for the Prohibition Party. However, voters did not elect her. Next, she lobbied the New York State legislature to vote for ratification of the Eighteenth Amendment. (That amendment established National Prohibition.)

Then in 1920 she ran unsuccessfully against James Wolcott Wadsworth, Jr. for the Republican Party nomination for the U.S. Senate. When that failed, she ran for that office on the Prohibition Party ticket. However, she lost to Wadsworth. Later she again ran for the Senate twice but lost both times.

In 1925 Boole became president of the national WCTU. She held that post until 1933. Those were difficult years for advocates of National Prohibition (1920-1933).

Pro-Repeal leader Pauline Sabin  said she started the Women’s Organization for National Prohibition Reform  (WONPR) because of Boole. Ms. Boole asserted to Congress that ‘I represent the women of America!’ Sabin said to herself ‘Well, lady, here’s one woman you don’t represent.’ Pauline Sabin’s group raised awareness. It had been generally assumed that women supported Prohibition. Of course, in addition to Ms. Sabin, there were millions more who opposed it.

Boole served as president of the World Woman’s Christian Temperance Union from 1931 to 1947. Thus, for several years, she was both president of the national and the world WCTU. She stepped down from her leadership at age 88. Boole continued to insist that prohibition had been a great success.

Readings and Recordings by Ella Boole

Ten Reasons Why the Woman’s Christian Temperance Union Should Carry On. Evanston: WCTU, 1919.

Prohibition is the Best Method. Minneapolis: 1927.

Prohibition. Reel-to-reel tape, 1932. (Boole argues the advantages for prohibition for everyone.) 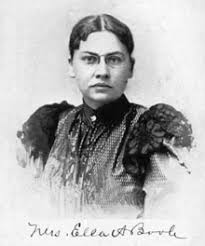 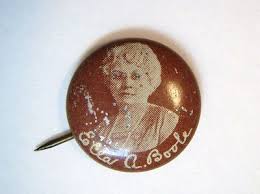