About half of men 50 years of age suffer from an enlarged prostate. When not caused by cancer, it’s called benign prostate hyperplasia (BPH). The condition causes urination problems. The proportion of sufferers increases to about 80% at age 70. So it’s a very common problem. Fortunately, enlarged prostate risk is reduced by drinking alcohol.

The symptoms of  benign enlarged prostate vary. However, the most common ones involve changes or problems with urination.

Men who have two or more alcoholic drinks per daily are 33% less likely to develop enlarged prostate than abstainers. 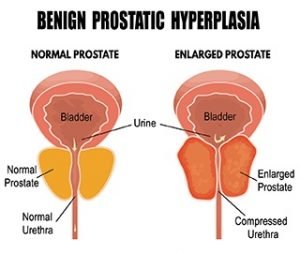 Those who have at least four servings of vegetables each day also enjoy reduced risk. However, eating red meat daily increases the risk. So does consuming high levels of fat. Dietary supplements have no effect on enlarged prostate risk.

The symptoms of BPH are similar to those of other conditions. Therefore, men are wise to discuss their symptoms and medical history with their doctor.

Kristal, A., et al. Dietary Patterns, Supplement Use, and the Risk of Symptomatic Benign Prostatic Hyperplasia. Results from the Prostate Cancer Prevention Trial. Am J Epidemiol, 2008, 167(8), 925-934.

Taguchi, Y. The Prostate. Everything You Need to Know about the Man Gland. Westmount, Que: Linda Leith, 2014.