Can a single drink cause fetal alcohol syndrome (FAS)? Can pregnant women safely drink in moderation? Who is at greatest risk of having a child with the problem? How we can reduce FAS?

These are very important questions. And the answers to them can influence people’s behaviors.

I. What is Fetal Alcohol Syndrome?

Fetal alcohol syndrome is a serious health problem. It tragically affects its victims and their families. But it’s preventable. Causing a child to suffer from FAS is really nothing short of child abuse. And it lasts for life.

Babies born with fetal alcohol syndrome tend to weigh less and be shorter than normal. They usually suffer from many problems.

Should Pregnant Women Drink At All?

Is there a safe or acceptable level of drinking for pregnant women?

A large study looked at 400,000 women in the U.S. All had consumed alcohol during pregnancy. Not a single case of FAS occurred. And no adverse effects occurred when consumption was under 8.5 drinks per week.3

A review of research found that fetal alcohol syndrome only occurs among alcoholics. There is no apparent risk when the pregnant woman consumes no more than one drink per day.4

A study of moderate drinking during pregnancy found no negative effects. The researchers suggested that one drink per day gives a wide margin of safety.5

Researchers studied pregnancies in eight countries. Having no more than one drink per day did not appear to have any effect on fetal growth. Researchers followed-up the children at 18 months of age. Children from women who drank during pregnancy scored higher in several areas of development. This, among those who  two drinks per day.6 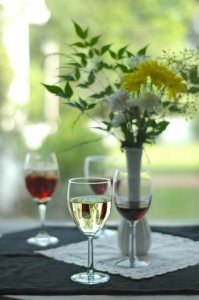 Seven medical studies included over 130,000 pregnancies. They found that having two to 14 drinks per week does not increase risk of fetal alcohol syndrome. Or of malformations of any form.7  Negative effects were related to relatively higher levels of drinking per occasion.  That results in higher blood alcohol content levels. Thus, it would to be important never to have more than one drink in any one day while pregnant.8

The guidelines of the Royal College of Obstetricians and Gynaecologists said this. “[W]omen should be careful about alcohol consumption in pregnancy.”9 It recommended two drinks a couple of times each week.10 This is consistent with the research findings of the US Institute of Medicine of the National Academy of Sciences.11

The American College of Obstetricians and Gynecologists concluded that “there is no evidence that an occasional drink is harmful. Women who drink heavily throughout pregnancy may have smaller babies with physical and mental handicaps. However, women who drink moderately may have babies with no more problems than those women who drink rarely or not at all.”12

It said “It’s hard to determine the amount and timing of alcohol consumption that puts the fetus at risk. One study shows that women who drank only occasionally and moderately had babies with no more problems than those women who drank rarely or not at all. There were no differences either in size or number of babies’ handicaps between the women who drank moderately and those who abstained or drank likely.”13

The Harvard Women’s Health Watch advises pregnant women. It says that “having more than one alcoholic drink per day puts the fetus at risk for various defects and disabilities.”14

Thus, it suggests that expectant women should limit themselves to one drink per day. It notes that one drink is 12 ounces of beer, five ounces of dinner wine, or 1.5 ounces of spirits.

Each of these standard drink siizes has the same amount of alcohol. That is, six-tenths of an ounce of pure alcohol.

There is even little evidence that occasional binge drinking during pregnancy seriously harms the fetus. That’s according to an analysis of medical research published in the 35 years between 1970 and 2005. It analyzed over 3,500 studies. Binge drinking was having five or more alcoholic drinks per occasion.

There was little evidence that binge drinking caused miscarriage, stillbirths, abnormal birthweight, or fetal alcohol syndrome. There was some suggestion that it might impair normal neurodevelopment, although the effects were generally quite small.15

There is even evidence that light drinking during pregnancy may be good for children. One was from a study of 12,495 three-year-old children. It found that those whose mothers drank light amounts while pregnant benefitted. They had fewer conduct, emotional and peer problems than did those born to abstaining mothers.

The research used a national sample of infants born in the UK. They were from the U.K. Millennium Cohort Study.  This project followed the health of children born between 2000 and 2002.

Doctors compared boys born to light drinkers with those born to abstainers. They had 40% fewer conduct problems and were 30% less likely to suffer hyperactivity. They also had higher scores on tests of vocabulary and of ability to identify colors, shapes, letters and numbers.

Girls born to light drinkers were 30 percent less likely to have emotional symptoms and peer problems. That’s compared with those whose mothers abstained from alcohol during pregnancy.

Two percent of all mothers were heavy drinkers. Their children were more likely to have problems.

The National Institute for Health and Clinical Excellence (NICE) issues health guidelines in the UK. It concluded that it is safe for expectant mothers to have a small drink of alcohol each day.17

Two weeks later, Britain’s Department of Health changed its advice. It had recommended no more than two small drinks per day. It changed that to recommending that pregnant women not drink any alcoholic beverage.18

Then the Royal College of Obstetricians and Gynaecologists made a statement on the matter. It said that light alcohol drinking during pregnancy might affect the long-term health of child.19 It restated its recommendation to two drinks twice a week.20 A new British Medical Association report followed this. It said that pregnant women should abstain from alcohol.21

The British Medical Journal added to the confusion. In it, an employee of the British Medical Association warns of “possible risks” to the foetus (or fetus). She said that women should simply avoid alcohol entirely.22

Yet in the same issue of the journal, a leading medical authority disagreed. She insisted that “there is no evidence that alcohol in moderation causes harm to unborn babies.”23

The Australian Alcohol Guidelines recommend fewer than seven drinks per week. And with no more than two drinks on any one day. The Ministerial Council on Drug Strategy endorsed the Guidelines. That’s Australia’s highest decision-making body for alcohol and drug policy.24

Medical school textbooks on obstetrics are largely based on scientific evidence. Therefore, most condone drinking at some level by pregnant women. About one-third do not address the question. A few go beyond the scientific medical evidence. Thus, they recommend zero alcohol consumption during pregnancy.25

III. Should a Pregnant Woman Drink?

Several important points are worth noting about drinking and fetal alcohol syndrome.

Some pregnant women have become frantic upon realizing they had eaten salad that had wine vinegar dressing. They thought their children would be born with fetal alcohol syndrome. Of course, wine vinegar has no alcohol.

Scare tactics can cause problems.  “One drink can hurt your foetus” was a mass media campaign in the province of Quebec. The province dropped it after women who had consumed a single drink while pregnant demanded abortions. Usually they didn’t know they were pregnant at the time.26

There is no evidence that light drinking, even on a daily basis, leads to fetal alcohol syndrome. Actually, most women who are light or moderate drinkers choose not to drink while pregnant.

The real problem is among frequent heavy drinkers. They often are alcoholics. They drink heavily on a daily basis throughout their pregnancies.27.

Additionally, those who have fetal alcohol syndrome children generally smoke and use illegal drugs. They are often malnourished and rarely get good medical care while pregnant. And drinking during pregnancy has not declined among such women over time.

Because of their addiction, they are virtually immune to our educational approach. This may also be because so many of these women have low education and often lead marginal lives.27

This is the group to which we should direct our efforts. We need a massive drive to help these women. It will not be cheap or easy. But it’s essential if we are to reduce fetal alcohol syndrome.

We need to abandon scare tactics for real solutions.

12. Am Coll Obstet Gyn. Alcohol and Your Unborn Baby. Washington, DC: The College.

21. Pregnancy and Alcohol. How Much is Safe? Med News Today website.