Frances Willard (Frances Elizabeth Caroline Willard), was born in 1839. She was sturdy, independent, and very strong-willed. Friends called her Frank.

She graduated from college in 1859. Twelve years later became president of a women’s college herself. When it merged with Northwestern University, she became dean of women there. She resigned 1874 because of conflicts with the university president.

That year an anti-alcohol movement called the Woman’s Crusade or the Woman’s Temperance Crusade had emerged. Frances Willard was invited to become president of a Chicago temperance group. From this position she quickly advanced in that movement. She became secretary of the new statewide temperance society. Then she became corresponding secretary of the national Woman’s Christian Temperance Union (WCTU). All of this within all within only one year. 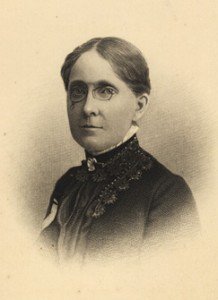 Willard soon had conflicts with the president of the national WCTU and left it. With her companion, Anna Gordon, she obtained over 100,000 signatures on a Home Protection petition. It called on the Illinois legislature to let women to vote on any matter involving alcohol. The proposed legislation failed to pass.

Francis Willard opposed immigration of what she called “the scum of the Old world.” She was a racist who hoped a national prohibition movement would “weld the Anglo-Saxons of the New World into one royal family.”

She wrote many articles fo the WCTU. Her autobiography is  Glimpses of Fifty Years: The Autobiography of an American Woman, The book was published by the  WCTU in 1889. It was most recently re-published in 2013. Copies of her book are widely available in libraries.

Frances Willard was a persuasive speaker, skilled lobbyist and effective pressure politician. Her efforts advanced the cause of temperance. She died in 1898. This was before either women’s suffrage or National Prohibition  began. She would have been pleased.

A statue of Frances Willard stands in Statuary Hall in the United States Capitol.