The geography of alcohol is a fascinating subject. The spatial arrangement of activities is important. It can provide important insights. It can point out the unexpected. And also guide public alcohol policy.

V.   Resources on Geography of Alcohol

Texas has the most alcohol-related traffic crashes in the U.S. Of course it has more drivers than most other states. But California has a larger population driving more miles than any other state.

So California should have the most alcohol-related crashes. But there’s one very important difference between the two states. And it’s this. Texas has a large number of dry or prohibition counties. California has none.

Dry counties in Texas have more alcohol-related traffic crashes than wet ones. Completely dry counties have over three and one-half times the number per capita than completely wet counties.

In Kentucky, researchers studied about 39,000 alcohol-related traffic crashes. A much higher proportion of residents in dry counties have such accidents.

Other researchers analyzed all counties in Arkansas. They report that dry counties have higher alcohol-related fatalities than wet counties. This is true throughout the state.

It appears that those in dry counties have to drive farther from their homes to drink alcohol. Thus they increase their impaired driving exposure.

A newspaper described the situation. It reported that when an area is dry, it means driving across the county line. Sometimes it takes crossing several county lines to reach an oasis.

Colder, darker climates increase alcohol consumption. That is, people living in cold regions of the world drink more alcohol. That’s in comparison to those who live in warmer regions.

Researchers used data from several sources to study the geography of alcohol. They were largely from the World Health Organization (WHO) and the World Meteorological Organization (WMO). But they also used much data from other large, public sources.

The researchers note that drinking expands the width of warm blood vessels to the skin. Because our skin is full nerves, alcohol makes us feel warmer. Another reason for increased drinking may be that less light is depressing. Again, drinking makes us feel better.

A study reported in USAToday lists U.S. states by “excessive alcohol consumption.”  (See below for critique of its misleading definition of supposedly excessive drinking.)

Dr. Alex Berezow of the American Council on Science and Health has a sharp eye. He noticed something curious in the USAToday list. It seemed that “excessive” drinking was higher in northern states. So he analyzed the data.

He plotted the proportion of a state’s population drinking excessively and its average latitude. (The higher the latitude, the more northerly the state.) In the graph, the best-fit line is black. The confidence interval is red. 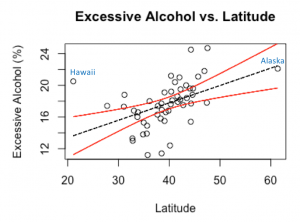 So, the farther north the state, the more likely its residents are to drink “excessively.”

Dr. Berezow noted that Hawaii is clearly an outlier. It’s farthest south with very high alcohol consumption. (Of course, its high per capita rate is inflated by tourism.) On the other hand, Alaska is exactly where expected. But he thought it might have too much influence on the best-fit line location. So he removed those two states and re-analyzed the data. 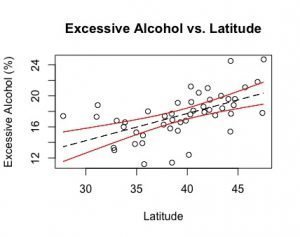 The study reported in USAToday defines “excessive” as either of the following.

A. So-called binge drinking. That is, “four or more drinks in a single occasion for women and five or more for men.”

B. Heavy drinking. That is “at least eight drinks per week for women and 15 for men.”)

However, there are serious problems with each of these definitions. 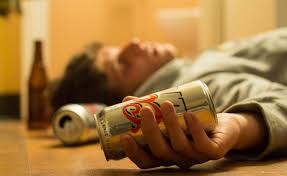 First, let’s look at binge drinking. Doctors and other clinicians define a binge as engaging in self-destructive drinking lasting at least two days. During the binge, the drinker “drops out” of usual activities. The binger ignores responsibilities such as going to work.

Prolonged intoxication and neglect of usual activities are the essentials of a binge. Without those, it’s not a binge.

A common guideline for responsible drinking is no more than one drink per hour. This guards against intoxication. Yet the study would define this responsible woman as a binge drinker! 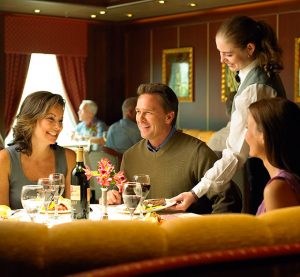 Second, consider the study’s “heavy drinking.” The U.S. government recommends that women drink no more than seven drinks per week. For men, it’s 14 drinks per week. On the other hand, many countries recommend higher levels.

Defining heavy drinking as consuming one additional drink per week is arbitrary. And hard to justify. Few people would consider that to be heavy drinking.

So the definitions of “bingeing” and heavy drinking seem far from being excessive consumption. Unless one is a member of the Woman’s Christian Temperance Union (WCTU) or other temperance group. (The WCTU and other temperance organizations are still active.)

Alcohol belts or regions in Europe are based on traditional alcoholic beverage preferences. Thus, there’s a beer belt, a distilled spirits belt, and a wine belt. However, there are many overlaps among them. 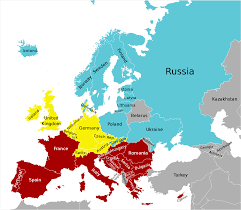 V. Resources on Geography of Alcohol and Drinking

Mapping the Rise of Craft Beer.