The federal Prohibition Bureau appointed Harold D. Wilson Director of its Massachusetts office in June of 1921. However, the office was reorganized six weeks later and he became Deputy Director. Nevertheless, he remained a highly motivated Prohibition agent.

A minister explained the name “Three Gun” Wilson. And it wasn’t because Wilson carried three firearms. It was because of his three-pronged approach.

First, he was a daring and relentless enforcement raider.

Second, he was a forceful speaker and writer who commanded attention.

Third, he was an organizer and leader whose enthusiasm was contagious.2 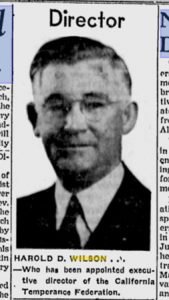 As an extreme dry, “Three Gun” Wilson was determined to stamp out all drinking. No matter who was guilty. To do so he would use whatever means necessary.

For example, he learned of a party honor the governor of the state. He also learned that alcohol would be served. So he decided to raid it. Of course, he knew doing so would cost his job. Yet Wilson said he was so disgusted at the monumental hypocrisy that nothing could stand in his way. Not even losing his job.

The next day, the raid was big news across the state and beyond. Just a month la­ter, the Prohibition Bureau in Washington fired him. He had only been on the job for eight months.

Shortly thereafter, “Three Gun” published his book, Dry Laws & Wet Politicians (click to read). In it, he exposed the hypocrisies of many politicians.

The Prohibition Bureau was a troubled agency. Most agents had their jobs through politics. Corruption and scandal plagued the agency. Therefore, Congress passed the Bureau of Prohibition Act. As a result all agents hired or re-hired had to pass a Civil Service exam. In fact, fifty-nine percent of existing employees failed their exams.

The Prohibition Bureau re-hired Wilson under Civil Service in 1930. It appointed him Deputy Director of prohibition headquartered in Pittsburgh, Pennsylvania. The district included nearby states.

After a few months he raided a picnic of a political group. So he was transferred to Wilmington, Delaware. Shortly after that, Wilson raided a party for the governor of his new state!

During the trial, Wilson refused to tell the judge who gave him the key enabling the raid. This led to the case of Wilson v. United States. In that case, the court held him in contempt and sent him to jail.

After his release, the Prohibition Bureau sent him to Nebraska. There, he wrote his second book, Dry Laws, Facts Not Fiction (click to read). In it he argued that Prohibition can effectively be enforced. The book seems oddly optimistic.

Some of Wilson’s raids were a result of power struggles as well as his desire for publicity. In his thirst for fame, he resembled the famous Prohibition agents Izzy Einstein and Mo Smith.

To Wilson, preventing drinking was more important than legalities and the rights of citizens. As a result, he was accused of illegal search and seizure. In this, he resembled Prohibition agent William Harvey Thompson (“Kinky” Thompson). Discover why his nickname was “Kinky.”

Repeal ended National Prohibition in 1933. However, it didn’t end Wilson’s war against drinking. He continued speaking against alcohol as often as three times in one day.

In 1944, thousands of young Nebraskans were in France fighting in the 134th infantry. Thousands more were out-of-state doing defense work.

Harold D. Wilson headed the Allied Dry Forces of Nebraska. He decided this would be a good time for a vote on returning prohibition to the state. His group got the measure on the November, 1944 ballot.

That led to formation of the Committee of Men and Women Against Prohibition. It was led by Keith Neville. He had been governor of Nebraska during the Prohibition era. This made him a credible and powerful opponent. 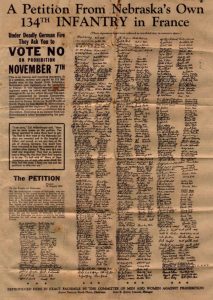 True to form, “Three Gun” fought hard. Many men in the 134th had signed a petition protesting the vote in their absence. Wilson claimed that many of the soldier’s signatures were fraudulent.

Many people objected to Wilson’s tactics. For example, the American Legion passed a resolution.  It condemned “the unwarranted, unjustified, un-American and scurrilous attack of ‘Three Gun’ Harold D. Wilson on … the fighting men of the 134th infantry.”3

Wilson continued fighting for prohibition for the rest of his life. He served as Executive Director of the California Temperance Federation. He also was Executive Secretary of the Foun­dation for Alcohol Educa­tion. In spite of its name, the Foundation was a temperance group.