The history of beer in the 19th century was one of innovation. The introduction of thermometers and hydrometers led to major improvements in the brewing process. The modern era of brewing began in the late 1800’s with commercial refrigeration, automatic bottling, pasteurization, and railroad distribution.

This page is part of a series

History of Beer Before Christianity: Timeline.

History of Beer in Early Christianity & Beyond: Timeline.

History of Beer in the 16th Century: Timeline.

History of Beer in the 17th Century: Timeline.

History of Beer in the 19th Century: Timeline.

History of Beer in the 20th Century & Beyond: Timeline

1810
• Munich established Oktoberfest as an official celebration.
• 132 breweries in the U.S. produced 185,000 barrels of beer. The population of the country was seven million.

1817
The invention of the drum roaster enabled the creation of very dark, roasted malts. This contributed to the flavor of porters and stouts.

1818
A steam engine was installed in a Philadelphia brewery. This was the first engine used in North American beer production.

1829
The Yeungling Brewery began producing beer in Pottsville, PA. It is the oldest brewery in the U.S., It’s still owned by the Yuengling family.

1830
• England passed the 1830 Beer Act. It allowed any ratepayer to buy a license to brew and sell beer.
• Belgium rebelled against the Netherlands. One of the reasons for the rebellion was the heavy taxes on beer.

1833
The Guinness brewery was the largest in Ireland. 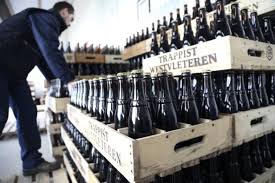 Trappists monks at St. Sixtus in Belgium began brewing Westvleteren beer. They did so to finance construction of a new monastery.

1844
A brewery was started in Milwaukee that becomes Pabst Brewing.

1849
A brewery  was established in Milwaukee that evolved into the Schlitz Brewery.

1860
• A total of 1,269 breweries produced over one million barrels of beer in the U.S. The population was 31 million. New York and Pennsylvania produced 85% of the total.
• A U.S. patent was received for the first commercial refrigeration machine. This later proved to be very important in the production and distribution of beer.

1862
Beer was taxed at one dollar per barrel to help finance the government during the U.S. Civil War.

1864
In the Netherlands, Gerard Adriaan Heineken founded a brewery in Amsterdam.

1868
• John Siebel opened a brewing school that later became the Siebel Institute of Technology.
• Publication of the monthly magazine The American Brewer began.

1870’s
Adolphus Busch pioneered the use of double-walled railcars. They were supplied by a network of icehouses. This enabled Budweiser to become the first nation-wide beer brand.

1873
•Beck’s Brewery was founded in Bremmen, Germany.
•A record number of 4,131 breweries produced nine million barrels of beer in the U.S.

1875
The Schmitt brewery was built by an innkeeper for his restaurant in Singen in the German state of Thuringia.

1876
Louis Pasteur published Studies on Fermentation showing the role of yeast in brewing. He developed the pasteurization process to stabilize beer. It was pasteurized 22 years before milk was pasteurized.

1880s
The Guinness brewery became the largest in the world

1880
• A beer filter was developed by a German inventor.
• Beer, Its History and Its Economic Value as a National Beverage  was published by Frederick Salem. In it he argued that drinking beer was an effective temperance measure. His motto was “Beer against Whisky.’
• There were 2,830 breweries in the U.S..
• The U. S. Brewers Academy was formed.

1882
The National Brewers’ and Distillers’ Association was formed in the U.S.

1883
The first single-cell yeast culture was isolated in Denmark. Brewers were then able to select those strains that made the best beer. It also promoted brand consistency by eliminating undesirable yeast strains.

1888      For the dedication of a fountain in Portland, Oregon, a brewer offered to pump his beer through it. The city declined the offer.[/boxed_ins

1890s
Pabst was the first U.S. brewer to sell over one million barrels in a year.

1898
• The beer barrel tax raised to $2.00 in the U.S.during the Spanish American War. As a result, beer sales declined.
• The Royal Brewery was the first to operate in Hawaii.

Books on the History of Beer in the 19th Century.