Ida B. Wise was a strong advocate for Prohibitiont. She became Ida B. Wise Smith upon her marriage.

As a young woman she joined the Iowa Woman’s Christian Temperance Union (WCTU). She showed commitment and very good leadership. Therefore, she steadily advanced through the organization. For twenty years she was president of the state WCTU in Iowa.

Ida B. Wise Smith was the major drafter of the Sheppard Bone-Dry Act. That law imposed prohibition on Washington, D.C. in 1916. National Prohibition went into effect in 1920.

The many problems it caused led to calls for its repeal. To counter the growing Repeal movement, Ms. Wise-Smith promoted the WCTU’s anti-repeal slogan. It was ‘Observance and Enforcement – Not Repeal.’

She became president of the national Women’s Christian Temperance Union after the repeal of Prohibition in 1933. Membership declined, but she continued to lead unsuccessful attempts to return the country to Prohibition. She continued doing so throughout the 1930’s and 1940’˜s.

The first World War had helped the Prohibition movement greatly. Ida B. Wise Smith hoped that WWII could be similarly useful. But her attempts to exploit the war failed. The military believed that letting the troops drink was important to morale and promoting the war effort. 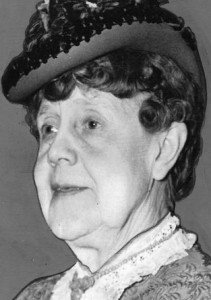 “In 1977 Ida B. Wise Smith was inducted into the Iowa Women’s Hall of Fame. Two years later the Ida B. Wise Smith historical marker was dedicated in Union Park in Des Moines. Toward the end of her last term as WCTU president, she gave a reporter the philosophy that led her to a lifetime of crusading. She said ‘I love God, my country, and little children. I hate the liquor traffic, and abhor all vice.'”1 