Ignition interlocks are designed to prevent intoxicated drivers from driving their vehicles. They require that the breath sample be free of alcohol before the vehicle’s engine will start. But are ignition interlocks effective in reducing deaths from traffic crashes? 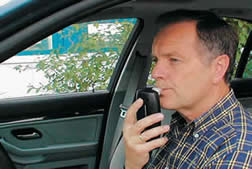 Researchers explored that important question. Some states require interlock ignition devices on the cars of all persons convicted of drunk driving. They compared the alcohol-related traffic crash death rates of states with and without such laws. There were 18 states with these laws and 32 without them. The researchers used data estimated by the National Highway Traffic Safety Administration (NHTSA).

There are many problems with ignition interlock devices. Someone other than the driver can blow into the sensor. The devices don’t actually measure blood alcohol concentration (BAC). They only estimate it. The devices are subject to significant error. These factors can harm individual drivers. Yet the devices appear to be effective in reducing alcohol-related traffic fatalities.

The researchers drew a reasonable conclusion. ‘Interlocks are a life-saving technology that merit wider use.’