Indiana alcohol laws surprise many people. They prohibit doctors from prescribing meds that contain any alcohol. Prohibit priests and ministers from giving sacramental wine. And parents from giving wine with Seder. They also prohibit parents from teaching their offspring how to drink in moderation. They even prohibit 20-year-old newlyweds from sharing a glass of wine at their reception.

It’s all too easy to break alcohol laws in Indiana.

Young people often want to work part-time. Many want to work in hospitality. Some need to know the age for jobs involving alcohol. At what age can they be servers in venues that sell alcohol? To be bartenders? To be cashiers in stores selling alcohol to drink off-site? People have questions. So we have answers.

Indiana alcohol laws let adults be servers or cashiers in venues that sell alcohol. Of course, adults are those age 18 or older. It can be for drinking either on or off-site. A supervisor must be present. On the other hand, the minimum legal age to tend bar is 21.

Indiana has no law that prohibits those under the age of 21 from buying alcohol. However it prohibits giving false information to buy it. It also prohibits having or drinking alcohol by such persons.

Indiana alcohol laws also prohibit those under 21 from driving with a BAC over 0.02%.

Licensed retailers may sell or serve alcoholic beverages from 7:00 a.m. to 3:00 a.m. Mondays through Saturdays. Restaurants and bars may serve alcohol between 10:30 a.m. and 12:30 a.m. on Sundays.

Microbreweries may sell their products on Sundays where they brew them. In addition, the state permits them to sell at trade shows and similar events.

It’s illegal to sell or give alcohol to an intoxicated customer. A seller who does so faces civil liability if injury or death results.

Businesses that sell alcohol for drinking on-premises have special requirements. Specifically, they must have food service seating for at least 25 customers. Minimum food service consists of hot soups, hot sandwiches, coffee, milk, and soft drinks. Businesses must make that service available during their alcohol sales hours.

It’s illegal to give discounts to some without making them available to all customers. For example, “drinks half-price to females.” Also unlawful are “Happy Hour” prices that are not available all day. For example, reduced prices between 5:00 and 7:00 p.m.

Off-site retailers must check the IDs of every customer under age 40. But this isn’t a legal requirement for on-site sellers.

It’s illegal for anyone under age 21 to buy alcohol. Or to try to buy it. And it’s also illegal to give alcohol to anyone that age or who is intoxicated. A person who does so commits a criminal offense. The person also faces civil liability if injury or death results.

Customers cannot buy cold beer or wine at grocery stores. They can only buy them at liquor stores. Microbreweries may sell their products any day of the week. The sales imit is two cases per person.

Visit Avoid an OWI in Indiana (5 Things to Know about OWI, DWI, or DUI).

Indiana’s OWI laws also prohibit driving while using alcohol or drugs, even if not intoxicated.

Penalties for OWI depend on the driver’s age, BAC level, and the age of any passengers. Also on the number and type of any driving convictions and the judge.

A restricted hardship license is possible after 30 days of license suspension. Judge may require installation of an ignition interlock device (IID) on vehicle. This prevents vehicle from starting if too much alcohol is in driver’s breath. Of course, the offender pays all costs.

A BAC over 0.15% receives more severe punishments. So do repeat offenses and OWIs resulting in injury or death

All drivers have a right under the U.S. Constitution to decline submitting a chemical test. However, Indiana punishes those who use their right. It does so by suspending their driving license is for two years. On the other hand, failing a breath test brings only suspension for 180 days.

However, there is no legal penalty for refusing to take a field sobriety test. These are very unreliable. For example, 30% of completely sober people fail them. That is, about one of every three people with zero alcohol (a BAC of 0.00%) can’t pass them.

Police love field sobriety tests. They often insist that the law requires taking them. The law does not. Or police say drivers can prove they’re innocent by taking the test. But drivers don’t need to prove their innocence. To the contrary. The burden of proof is on the state to prove that drivers are guilty.

While investigating, police can legally lie. So don’t be a sucker and fall for it.

Lawyers strongly urge drivers to never, ever take a field sobriety test. They say to politely refuse. And to do so as long as necessary. 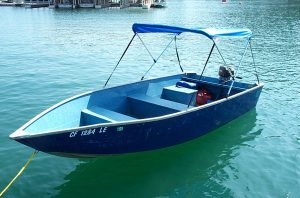 It’s a violation of Indiana alcohol laws to operate a motorboat or a personal watercraft (PWC) while intoxicated. That may be from alcohol. Or from any combination of alcohol, controlled substances, or drugs.

Having a BAC of 0.08% is intoxication. So is having enough alcohol and/or drugs to cause danger to others. Therefore, police can arrest operators with a BAC over 0.05% but under 0.08%

It’s also illegal for boat or PWC owner to let an intoxicated person operate it.

A first boating while intoxicated (BWI) offense includes the first within ten years. Penalies may include suspension of both vehicle and vessel licenses. And that suspension is for 90 days to two years.

The penalties for a second conviction within five years increase. They may include a fine plus loss of both vehicle and vessel licenses. This time the suspension is for one to two years.

Any additional BWIs lead to more severe punishments. A BWI that causes serious injury or death receives jail, fines, suspension of licenses, and other penalties.

The state also punishes refusing a chemical test with the penalties consistent with those above for convictions.

A good rule is simply not to drink and boat.

Alcohol laws in Indiana can be confusing. This is true in any state. They also differ between counties and between cities. Their interpretation can change. And they can conflict. So don’t rely on this site. Nor on any other.

Get advice on Indiana alcohol laws from an expert. That is a lawyer with a license in the state. That’s wise.

At this point you know much more about Indiana alcohol laws than most people. So congratulations!