The Knights of Father Mathew was a Catholic temperance society that originated in Ireland. It promoted complete abstinence from all alcohol. The Knights was formed in 1838 by Theobald Mathew (generally known as Father Mathew) in Cork, Ireland.

National Prohibition in the U.S.

Branches of the group spread throughout Ireland. Father Mathew also traveled in England and Scotland (1842) and in the USA (1849 to 1851) to preach temperance. He was a major world figure in promoting temperance. It has been estimated that 7,000,000 persons took the pledge of abstinence under his influence.

Father Mathew began his work in the U.S. in 1849. He was entertained by the President. He was also granted a seat within the bar of the Senate and on the floor of the House. Only one foreigner, General Lafayette, had previously been given that honor. He was lauded on the occasion by famous statesman Henry Clay.

Father Mathew spent two and one-half years in the U.S. He traveled 37,000 miles, and visited 25 states. He administered the temperance pledge in over 300 cities and towns to more than 500,000 persons. 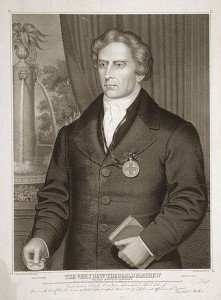 The Knights of Father Mathew in the U.S. was formed in St. Louis, Missouri, in 1872. In 1881, it added life insurance as a benefit to members. There were two categories, active and honorary members.

Chapters or ‘councils’ were permitted to organize branches of Catholic women. These were called “Ladies’ Auxiliaries of the Knights of Father Mathew.” The Ladies’ Auxiliaries were especially active in promoting temperance among children.

Fehlandt, A. A Century of Drink Reform in the United States. NY.: Eaton and Mains, 1904.