The Lever Act (Lever Food and Fuel Act) was passed by Congress several months after the U.S. entered WW I in 1917.

I. The Lever Act

Its official name indicates its goal. It was “An Act to Provide Further for the National Security and Defense by Encouraging the Production, Conserving the Supply, and Controlling the Distribution of Food Products and Fuel.” People often call it the Lever Food and Fuel Act. But most simply call it the Lever Act or the Lever Law.

By the time the U.S. entered the war, European food supplies were low. Agricultural production had been disrupted there. The resulting demand had increased prices both in Europe and in the U.S. 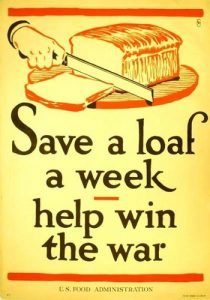 However, it was impossible to increase production quickly. It takes time to expand crops, poultry, livestock, and other agricultural products. Therefore, Congress decided to reduce U.S. consumption consumption through conservation.

This would permit the U.S. to feed its military and that of its allies. In addition, it could supply humanitarian food relief to populations needing it in Europe.

The temperance movement had become very strong by 1917. A large number of states had already passed state-wide alcohol prohibition by then. And there was a growing call for National Prohibition. 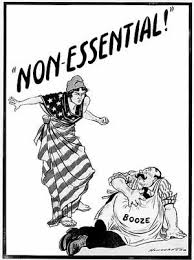 The Lever Act prohibited the use of any food product in the production of distilled alcoholic beverages. This was widely supported by temperance activists and supporters, of which there were many millions.

The law prohibited only the production of distilled beverages from foodstuffs. It did not prohibit the brewing of beer from from grains. Nor did it prohibit making wine from grapes or other fruits.

The Woman’s Christian Temperance Union (WCTU) used food conservation as yet another reason to support prohibition. The president of the WCTU argued that producing beer and wine wasted food. Scients and nutritionists recognized beer and  wine as foods. (The same was true for beverage spirits.) However, the WCTU insisted that the experts were wrong. 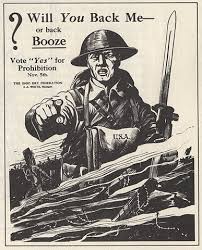 Given the strong temperance sentiment, it’s surprising that Congress didn’t prohibit the production of beer. However, organized labor strongly opposed prohibiting beer. And wine production was low and did not use significant quantities of grapes.

The focus on distilled beverages may have also reflected a popular myth. It’s true that an ounce of spirits contains more alcohol than an ounce of beer or wine. But standard drinks of beer, wine and spirits contain the same amount of alcohol.

Therefore, the same amount of foodstuffs are used to produce a drink of each. That is, a serving of beer,  glass of dinner wine, or  shot of whiskey. The latter includes gin, rum, or other distilled beverages.

Temperance supporters saw the Lever Act as a step toward National Prohibition. Indeed, they were correct. It went into effect at the beginning of 1920. 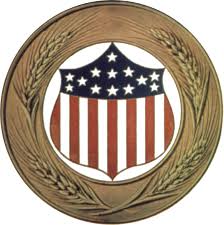 Hoover favored persuading the population to conserve food. The alternative was food rationing, which is cumbersome and requires a vast bureaucracy. Hoover’s slogan was that “Food Will Win the War.”

Women were central to the effort to reduce both consumption and waste. But there were also general appeals. And even appeals to children. 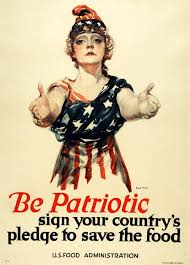 I, the member of the household entrusted with the handling of food, do hereby enlist as Kitchen Soldier for Home Service and pledge myself to waste no food and to use wisely all food purchased for this household, knowing that by so doing I can help conserve the foods that must be shipped to our soldiers and our Allies.

And children asked to join the Clean Plate Club.To do so they signed pledge cards. They said, in part, this. 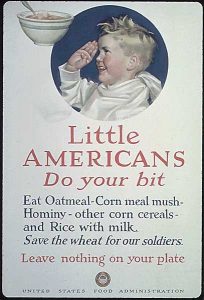 At table I’ll not leave a scrap of food upon my plate.
And I’ll not eat between meals, but for supper time I’ll wait.

Books, such as Foods that Will Win the War and How to Cook Them, had recipes for sugarless deserts. They explained how to use stale bread, cake, and cereal. Recipes used leftovers in soups. There were menus for wheatless, meatless, and porkless days. They provided practical suggestions for avoiding food waste.

There were also efforts to expand food production. People were asked to create Victory Gardens. Recipes showed a variety of vegetable dinners. By growing some of their own vegetables, families could avoid buying as much food.

The program was a great success. American food consumption fell by 15%. This provided much-needed food for the U.S. military and its allies.

In short, food really did help win the war.

Kingsbury, C. For Home and Country: World War I Propaganda on the Home Front. Lincoln: U NE Press, 2010.