This page will help you understand Mississippi alcohol laws and avoid expensive fines or even jail. Not to mention time and embarrassment.

Mississippi alcohol laws might surprise. The state has a strong temperance history. It had state-wide prohibition long before the rest of the country.

Mississippi was also the first to ratify National Prohibition (1920-1933). After Repeal it kept its own prohibition for almost one-third of a century. Then it “reaffirmed prohibition.” In addition, state alcohol laws prohibit bringing alcohol through a dry county while traveling.

Yet Mississippi’s state-wide alcohol laws are in the U.S. mainstream.

The state has local option. Therefore, localities set local laws. As a result, today about half of the state’s counties are “dry.” That is, they prohibit the sale of alcoholic beverages.

Many young people want part-time jobs. Many are in hospitality. Some involve selling or serving alcohol. What age is needed to serve alcohol in a restaurant? How about about for tending bar? What is it for selling alcohol for consumption off-site?

Those 18 or older may drink beer or light wine in private locations. A parent, guardian, or spouse must furnish it. It does not permit them to drink distilled spirits. That’s rum, vodka, tequila, gin, bourbon, scotch, etc. 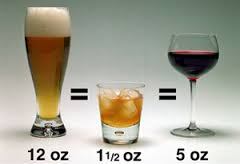 Distinguishing between spirits and other alcoholic beverages is based on a myth.

The myth is that a drink of spirits has more alcohol than a beer or glass of dinner wine. In fact, standard drinks of beer, dinner wine and spirits have equivalent alcohol content. Specifically, it’s six-tenths of one ounce of pure alcohol. So they are all the same alcohol-wise. Furthermore, they are identical to a breathalyzer.

The use of a false ID to buy alcohol is a crime. It may result in driver’s license suspension

It’s also illegal for those under 21 to drive with a blood alcohol concentration (BAC) of 0.02% or higher.

Mississippi has a government alcohol monopoly for the sale of all wine over 14% alcohol and all distilled spirits. Spirits are rum, vodka, gin, bourbon, scotch, tequila, etc. As a result product selection is very limited and prices are high.

Package stores sell alcohol for consumption off premises. They may sell from 10 a.m. until 10 p.m. Mondays through Saturdays. However, they may not sell on Sundays or Christmas Day.

Off-premises retailers may sell beer 24/7. However, local ordinances may restrict the hours of sale. And they may prohibit sales on Sundays.

Other retailers sell alcohol for drinking on their premises. They may sell from 10 a.m. until midnight Mondays through Saturdays.

On-premises businesses may sell beer from 7 a.m. until midnight seven days per week. Local ordinances may reduce these sales hours. On the other hand, they may not expand them.

However, in state-designated resort areas these sales days and hours do not apply.

Mississippi alcohol laws prohibit selling alcohol to anyone under 21. That includes adults under that age. 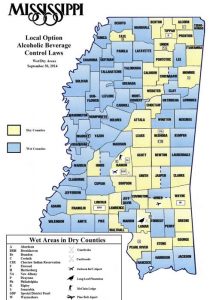 Mississippi alcohol laws prohibit anyone under 21 from buying alcohol. The penalty for doing so is a fine of at least $200. However, it could be as high as $500.

It’s also illegal for such a person to use a false ID in an attempt buy alcohol. The penalty is a fine of at least $200. But it could be up to $500. In addition, there is a sentence for up to 30 days of community service.

The use of a false ID includes using another person’s ID, altering one’s own, or reproducing a fake ID. Selling false driver’s licenses is punishable with imprisonment up to three three years. Plus a fine up to $5,000.

Adults (people 18 and older) serving in the military may drink beer on military property.

Persons under the age of 21 may enter the premises of  any business licensed to sell alcohol.

It’s illegal to bring any alcoholic beverages into Mississippi. It’s even illegal to transport alcohol across dry counties. For example, when driving from Tennessee to Louisiana.

Visit Avoid a DUI in Mississippi (5 Things You Need to Know about DUI).

Mississippi alcohol laws prohibit driving under the influence (DUI) of alcohol and/or drugs.

Those are the BAC limits. However, drivers can still be convicted of DUI with a legal BAC. That’s because some people are impaired below the legal limit. Likewise, many people have developed high tolerance. Therefore, they are not impaired over the limit. However, they may not use their lack of impairment in their defense.

It is legal to drink while driving, although the driver’s BAC must remain under 0.08% while doing so.

Penalties for DUI depend on the facts of the case. That includes driver age, severity of the offense, driving history, and other factors. Penalties increase for DUIs involving crashes, injuries, or deaths. Of course, the severity of penalties also depend on the judge.

These are the minimum penalties for drivers with DUIs and a BAC between 0.02% and 0.08%. Judges usually impose additional penalties because of zero tolerance.

All drivers have a U.S. Constitutional right to decline submitting to a chemical test. However, the state punishes those who use their right. It does so with a 90-day license suspension.

\Importantly, there is no legal penalty for refusing to take a field sobriety test. These are highly unreliable. In fact, 30% of completely sober people fail them. That is, about one of every three people with zero BAC (0.00%) fail!

For this reason, lawyers strongly urge drivers to never, ever take them. They say to politely refuse. And to do so as often as necessary. Therefore, it might be wise to follow their suggestion.

However, this will take willpower. That is because police know many ways to convince drivers to take field sobriety tests. They often falsely insist that the law demands it. Not so. In fact, no state in the U.S. does!

They may argue that drivers can prove their innocence by passing the test. In reality, it is the state that must prove that the driver is guilty. Officers themselves don’t think passing is proof of sobriety!

While investigating, police may legally lie. So don’t be a sucker for it.

Mississippi alcohol laws prohibit operating a watercraft under the influence of alcohol and/or drugs (BUI).

A BAC of 0.08% or higher shows alcohol intoxication. A watercraft is a vessel with a motor of 25 horsepower or higher. It also includes jet skis. 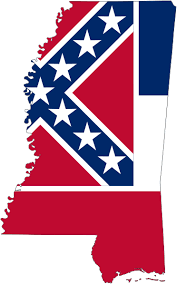 Use these to find more information.

Mississippi alcohol laws can be confusing. This is true in all states.  Courts can change their interpretation. Laws can conflict. They can be vague. It takes legal training to interpret them. Lawyers spend years in study. So don’t rely on this site. Nor on any other site.

Get information and advice about Mississippi alcohol laws from an expert. That is a lawyer holding a license in the state. It’ wise.