Dirty Bastard beer is banned in Alabama but Fat Bastard wine isn’t. That makes perfect sense, doesn’t it?The argument of the state’s Alcoholic Beverage Control (ABC) Board is simple. The word “bastard” is a profanity. And the ABC bans profanity from alcoholic beverage labels.

Alabama officials not only permit the sale of Fat Bastard wine but also Raging Bitch beer. Are the Dirty Bastard folks being denied their rights to equal protection? That’s guaranteed by the Fourteenth Amendment of the U.S. Constitution.

The ban also seems inconsistent with First Amendment free-speech rights. The New York Liquor Authority rejected a Bad Frog beer label. It showed a green frog making the middle-finger gesture. The Authority argued that children had to be protected from the image.

However, the 2nd U.S. Circuit Court of Appeals disagreed in Bad Frog Brewery v. New York State Liquor Authority. It observed that “In view of the wide currency of vulgar displays throughout contemporary society, including comic books targeted directly at children, barring such displays from labels for alcoholic beverages cannot realistically be expected to reduce children’s exposure to such displays to any significant degree.” It compared the rejection of the label to “the removal of a few grains of offensive sand from a beach of vulgarity.” 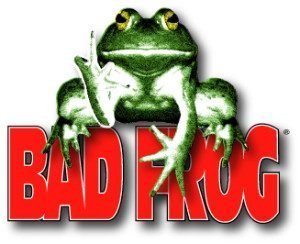 The Comic Book Legal Defense Fund reacted to the Court’s reference books. It said “If attempts were made to ban the display of comic books with titles and covers that some would consider vulgar [they] would invariably fail due to First Amendment protections.” It gave as examples Hellboy, Dicks, and Bastard!!  2

The Court also asserted that an image that might attract a child is not enough reason to ban it from a beer container. That’s because there are already laws prohibiting the sale of alcohol to anyone under the age of 21.

Attempts to control labels for alcoholic beverages are more restrictive across the countr than even those for comic books. This may reflect a neo-prohibitionist impulse of many officials in state alcoholic beverage control agencies.

National Prohibition was repealed in 1933. However, today over one-third of the counties in Alabama are dry. 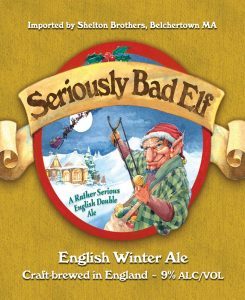 Earlier, the Connecticut Liquor Control Division prohibited the sale of “Seriously Bad Elf” in that state. The elf has a slingshot shooting Christmas tree ornaments at Santa’s sleigh far away in the sky. The Liquor Control Division contended that any image of Santa Claus on a label is illegal. That’s because it could cause children to want to buy it.

The year before, the Division approved the sale of “Santa’s Butt” beer. Did Liquor Control think that children wouldn’t recognize Santa’s rear? Presumably the company would have experienced no difficulty had it stuck with its original idea. That was showing the elf roasting a reindeer on a spit without any image of Santa.

The importer said it would go to court to defend its First Amendment right to free speech. It had done so successfully earlier in Ohio, Pennsylvania and Washington. The Office of Consumer Protection oversees the Connecticut Liquor Control Board. It later decided that the law applies only to distilled spirits labels, not to beer labels.

Confusing the matter, the Commissioner of the Office of Consumer Protection said that “our regulations specifically exempt labels.” That would mean that the regulations would not apply to distilled spirits labels either. So apparently the commissioner and his own office don’t agree.

The Liquor Control Division then reversed its earlier position. It then decided that the law doesn’t prohibit the label after all. So nowit  permits the sale of “Seriously Bad Elf.”

State officials may not understand their own confusing laws and regulations. Therefore they may not be applying them fairly and equitably. There’s apparently a “Seriously Bad Bureaucratic Mess” in the State of Connecticut.

Seriously Bad Elf may be permitted in Connecticut but no Dirty Bastard is being allowed in Alabama.