This page will help you understand Ohio alcohol laws and avoid expensive fines or even jail. Not to mention time and embarrassment.

Ohio alcohol laws apply to both residents and visitors. So knowing them is wise.

Young people often want part-time jobs. Many jobs are in hospitality. Some involve working with alcohol. Youths want to know if they are old enough for them. What’s the minimum age to serve alcohol in a restaurant? What’s it for tending bar? And what about for selling alcohol for off-site consumption?

Ohio alcohol laws permit adults 19 years or older to serve alcohol in venues for on-site drinking. And the same age for those who sell beer “across a bar.” However, to sell wine or spirits, a bartender must be at least 21 years of age.

To sell alcohol for off-site drinking, the age is adulthood. That is, age 18 or older.

Those of any age under 21 may drink with a parent or guardian present. They may also drink with their legal-age spouse. Finally, they may drink for legally specified religious, educational, or medical purposes.

On the other hand, parents may not provide any alcohol to other persons under the age of 21. That is the case even if the parents of those persons give their complete approval.

It’s also illegal to allow a person under 21 to remain in one’s residence or property while possessing alcohol. Of course, that doesn’t include one’s own offspring. There is no legal provision to ensure the safety of those expelled.

Those under 21 may not buy alcohol. However, they may buy to help police entrap clerks. The use of a false ID to buy alcohol is a crime.

It is illegal for those under 21 to drive with a blood alcohol concentration (BAC) over 0.02%.

State and Local Alcohol Laws in the U.S.

It’s illegal to sell alcohol to anyone under the age of 21 or to intoxicated persons. In addition, bars can’t legally to give free beer.

Local laws can restrict when businesses can sell or serve alcohol. They can and do occasionally prohibit the sale of any alcoholic beverage.

The penalty for illegal possession or drinking by minors is $250 maximum fine and/or up to 30 days jail. Minors are non-adults. That is, those age 17 or below.

For adult offenders under 21 the penalty is a fine up to $1,000 and/or up to 180 days in jail. First offenders may have the option of entering into a diversion program. If the violation occurred as a passenger in a motor vehicle, the court may suspend the offender’s license.

The penalty for giving alcohol to anyone under 21 is a $1,000 fine and/or up to six months in jail. In addition, people may sue the offender if the underage person hurts themselves, someone else, or damages property. Of course, parents and guardians can give alcohol to their own offspring of any age.

Ohio alcohol laws prohibit ordering distilled spirits over the Internet. It’s also illegal to bring into Ohio over one liter of spirits per person 21 or older. If consumers bring more into the state, they must physically go to one of the state government monopoly liquor stores. There, the purchasers must complete paperwork and pay taxes on the spirits.

It’s illegal to have an open alcohol container on public property, regardless of age. Ohio deems public property very, very broadly. A court may consider places that are visible, easy accessible, and open to the public to be public property. 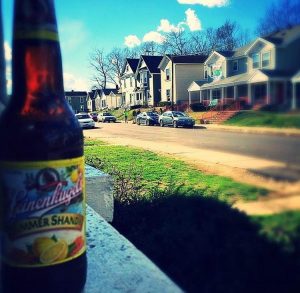 People consider their porch, stoop, and front yard to be their private property. But Ohio courts may consider it to be public property. So can can people drink alcohol on their own your front porch? One would hope so. Yet in Ohio, it’s unclear. The fine for having an open alcohol container is a fine of up to $150.

This also means that sports fans may not legally “tailgate” in a public parking lot.

One is that breathalyzers lack reliability. A second is that everyone produces alcohol in their bodies 24/7. A third is that many medications and food contains alcohol. Even fruit juices develop alcohol if left in a refrigerator too long.

The penalty for driving with a BAC of 0.02% or over is a $250 minimum fine. Or up to 30 days jail. Or both. The state also adds at least four points to the driver’s license. In addition, it suspends the license for between 90 days and five years.

A second conviction leads to a mandatory driver’s license suspension of at least 90 days. Additional fees are likely. And penalties increase with additional convictions.

Penalties include adding at least six points to the driver’s license. Also a 90 day suspension of the license. Jail for 72 hours or a driver intervention program. A fine of $375 to $1,075. In addition, there’s a license suspension of six months to three years.

The penalties include license suspension for one year. Jail for ten days to under six months. However, the court may require jail along with house arrest using an alcohol monitoring system. The fine is between $500 and $1,625. License suspension is for one to five years. Also, vehicle impoundment is for 90 days. Finally, there is alcohol and drug assessment.

The penalties include driver’s license suspension for two years. Jail for 30 days to under one year. Fine is $850 to $2,750. License suspension is two to ten years. There is also mandatory alcohol and drug treatment.

Offenders having convictions five times within 20 years appear on the Habitual Offender Registry. In addition, the public can see the offenders’ names, dates of birth, home addresses, and conviction records.

It’s also against Ohio law to loan a vehicle to person with a suspended driver’s license. The state’s penalty for doing so is to suspend the offender’s license.

It is illegal to carry previously opened containers of alcohol in a vehicle except in the trunk.

All drivers have a U.S. Constitutional right to decline BAC testing. However, the state punishes anyone who uses that right. The first time a driver uses the right, the state adds at least six points on the  license. In addition, it suspends the license for one year.

However, these punishments do not apply to refusing to do a field sobriety test. These tests are highly subjective and unreliable. In fact, about one-third of people with a 0.00% BAC fail.

Not surprisingly, lawyers strongly advise against ever taking a field sobriety test. Taking one can never help clear a person. So lawyers say never take one. Learn much more at Never Take a Field Sobriety Test Say DUI Lawyers.

Ohio alcohol laws make it illegal to operate a boat under the influence of alcohol and/or drugs. This also includes riding water skis, personal watercraft or similar devices.

For those 21 or older having a BAC of 0.08% or higher is being under the influence. Or it’s having drugs affect them to the extent they can’t operate safely.

Convictions lead to fines and possible time in jail.

Some boaters use their Constitutional right and decline a BAC test. In that case, they may not operate on the water for one year. If the person is the owner of the craft, the state also impounds the registration certificate and tags.

Ohio alcohol laws can change. So can county and local laws. They can conflict. Also, they can confuse. That is why lawyers study law for years. It’s not do it yourself. Never rely on this site. Nor on any other site. The stakes are too high.

So get advice about Ohio alcohol laws from an expert. That is a lawyer holding a license in the state. Alcohol attitudes and criminal justice practices vary widely across the state. Therefore, it’s a good idea to select a lawyer in your specific locality.