Some writers urge that older people drink less alcohol. They think it would “protect their bodies and minds.”  But Dr. Erik Skovenborg disagrees. He says people don’t develop low alcohol tolerance when they turn 65. That idea “is a myth based on plain ignorance, ageism prejudice and political correctness, mixed with a minuscule amount of fact.” 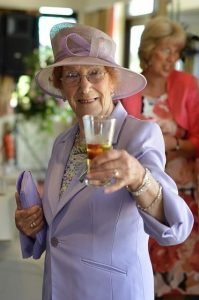 Fat doesn’t absorb alcohol. Older bodies tend to have a lower proportion of water to fat as they age. Thus, the same amount of alcohol would lead to a higher blood alcohol concentration (BAC). So some people say older people should drink less.

But from age 20-29 to 70-79, men’s total body water drops only 3.2%. The drop for women is even less. The increase in BAC would not be measurable on a Breathalyzer.

Some say older bodies don’t break down alcohol as well as younger bodies. However, medical research does not support that belief.

Drinkers Live Longer: Why Does Drinking Increase Length of Life?

Drinking Alcohol and Risk of Frailty: Is Drinking Good or Bad?

Risk of Dementia Reduced by Drinking Alcohol in Moderation.

Risk of Osteoporosis and Drinking Alcohol.

Dr. Skovenborg’s suggestion may actually be too conservative. The amount of alcohol most older people drink in the U.S. isn’t enough to get its health benefits. A government survey  proves this. Only 55% of people aged 50 had even a single alcoholic drink in the previous month. And the proportion declined with increasing age. It dropped to half among those age 60-64. Then to only 40% among those 65 and older.

Moderate drinking leads to better health and longer life. The high levels of alcohol abstention among older people are a health risk. It increases the risk of many health problems. These diseases are of special concern to older people.

Not drinking enough by older people might lead to unnecessary suffering for them. And to higher medical costs to society. It might be better to encourage older people to drink more for their personal welfare and that of society.

Perhaps the advice should be “older people drink more alcohol.” It certainly shouldn’t be to drink less. That’s a health risk.

Mazzei, A. and D’Arco, A. Alcoholic Beverage Consumption and Health. NY: Nova Biomedical, 2009.