Percy Andreae was a major leader against alcohol prohibition in the U.S.

Andreae was born on October 31, 1858 in London, England. After moving to the U.S., he became allied with brewers in Cincinnati, Ohio. In 1908, state candidates supported by the Ohio Anti-Saloon League (ASL) had great victories. As a result, Andreae organized a very successful opposition to the Ohio ASL’s power. 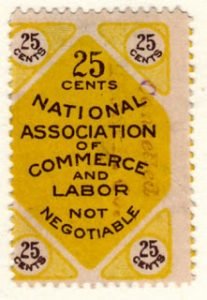 Next, Andreae decided to take his opposition to prohibition to the national level. Using financial support from brewers, he organized the National Association of Commerce and Labor (NACL).

As the support for nation-wide prohibition grew, the group issued stamps. Its member brewers were to affix these stamps to invoices. This was to raise money for anti-prohibition candidates.

The anti-prohibitionist was referring to “Methodists, Baptists and Presbyterians, and the like.” He noted that few Catholics, Jews, Lutherans or Episcopalians supported prohibition.

Indeed, the prohibition movement was characterized by religious and cultural intolerance. Before the Civil War (1861-1865), the U.S. population was largely rural and small town Protestants of English background.

Then for decades, tens of millions of immigrants arrived in the U.S. They were largely Catholics and Jews from southern and eastern Europe who tended to settle in large cities. And they typically drank alcohol daily with their dinner.

The established population saw the new arrivals as a threat to its power and way of life. Prohibition became part of a cultural war waged against the immigrant population.

Leaders of the prohibition movement were openly hostile to Catholicism, Judaism, and the new immigrants. For example, Bishop James Cannon, Jr. was head of the ASL’s legislative section. He despised Catholicism and called it “The mother of ignorance, superstition, intolerance, and sin.”

ASL leader William H. Anderson said opposition to Prohibition in New York City was easy to understand. It came from the “unwashed and wild-eyed foreigners who have no comprehension of the spirit of America.”

The Ku Klux Klan (KKK) of the 1920s was formed largely to promote and defend prohibition. Anderson said that the resurgence of the Klan was a natural and welcome response to Catholic opposition to prohibition.

Percy Andreae clearly had a point. But the aggressive prohibition movement wouldn’t be stopped by logic or reason. And nation-wide prohibition went into effect mid-January of 1920. Of course, almost 14 years later it was repealed.


Wikipedia asserts that the NACL largely employed former senators and representatives to promote its agenda. That may well be true. However, the reference used to support that assertion does not even mention the NACL. Wikipedia is often wrong. It’s not a reliable or authoritative source.

Andreae, P. Prohibition Movement in Its Broader Bearings upon Our Social, Commercial, and Religious Liberties. Addresses and Writings. Forgotten Books, 2016 (reprint). (Nine editions published between 1915 and 2016.)

______. Argument of Mr. P. Andreae before the Committee on Temperance of the House of Representatives in support of the Dean amendment to the Rose Law. 1911.

______. The Brewer and the Law. On the Responsibility for Abuses in the Liquor Traffic. How Prohibition Fosters the Evils It Pretends to Cure. Address Delivered at Convention of U.S. Brewers’ Association, June 9, 1910. NY: Allied, 1937.