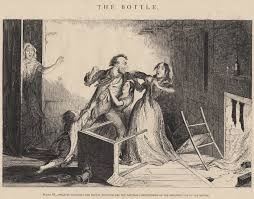 The Progrssive Era was between about 1890 and 1920. It was a reaction to social problems caused by industrialization, political corruption, and other developments. Progressives wanted to create an ideal society.  Their approach was to reduce individualism and increase the power of government.

The problems caused by the abuse of alcohol was one of their major concerns. They considered alcohol to be the major cause of all poverty, disease, crime, mental illness, violence, and misery. It was also, they insisted, the primary cause of spouse abuse, child abuse and neglect, and divorce.

The progressive solution was to “protect people from themselves.” To do so they would use governmental power. As a result, people wouldn’t be able to choose for themselves whether or not to drink. If they didn’t like that, too bad. It was for the greater good.

Progressives also believed that the producers and sellers of wine, beer, and spirits were victimizing the public. Prohibition was also their answer to this belief.

Two powerful movements converged to help the Progressive cause. One was a powerful women’s movement. Leading it was the Woman’s Christian Temperance Union (WCTU). The other was a growing anti-alcohol sentiment of major Protestant churches. They came to believe that alcohol was evil and that drinking it was a sin.

However, this created a serious problem. That’s because the Bible reports that Jesus both made and drank alcohol. So to deal with that problem and support their new doctrine, they created the innovative two-wine theory.

Prohibition was part of a cultural war between two groups. On one side were Protestant rural and small town residents who rarely drank. They felt threatened by another group. That was the massive number of new immigrats from Southern Europe and Eastern European Jews. These new residents tended to drink alcohol and to settle in large cities.

The Progressives’ prohibition movement resulted in strange alliances. For example, the WCTU often worked closely with the Ku Klux Klan (KKK). In fact, the Klan was revived in 1915 to defend state-wide prohibition in Georgia. The Klan also supported the right of women to vote. That was because women tended to favor prohibition.

WW I Helped the Cause

Progressives successfully pushed for nation-wide prohibition during WW I. They argued that grain used for alcoholic beverages was needed for the war effort. In addition, they also stressed that most brewers were German or of German heritage. The US was at war with Germany. So they portrayed brewers as un-American.

Progressives also pictured producers and sellers of alcohol as parasites who ensnared youths into alcohol addiction. They strongly opposed drinking in moderation. This, they insisted, was simply starting on the road toward ruination and early death. Again, the answer was simple.  It was  prohibition. 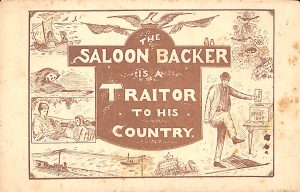 The Prohibition and Repeal Experiences of Various States.

Benefits of Prohibition were Many, but Rarely Recognized.

Szymanski, A. Pathways to Prohibition. Durham: Duke U Press, 2003.

This website is informational only. Thus it takes no position on prohibition and progressives.