The temperance movement began as a smoldering fire. Then it became a bonfire. During the 20th century it grew into a rageing forest fire. It finally led  to Prohibition in America.

Beginnings of Temperance in America: Timeline.

Emergence of Temperance in America: Timeline.

At first, local areas and a few states voted for their own prohibition. But the pace quickened early in the 20th century. By the time National Prohibition went into effect (1920), over half the population lived in dry (prohibition) areas.

This timeline covers major events during ratification of the 18th Amendment. That amendment established National Prohibition in America (U.S.). The timeline continues to the end of that societal experiment. Then a mighty storm arose and torrential rains subdued the fire. However, they didn’t extinguish it.

These were the exact dates in that month for each state.2

Pennsylvania ratified on February 25 and Connecticut did so on May 6, 1919. New Jersey ratified it two years after National Prohibition went into effect.4

Three states did not ratify the Amendment.

They were Illinois, Indiana, and Rhode Island. Alaska and Hawaii were not yet states. Therefore, they could not ratify.

Prohibition went into effect one year later. It banned the manufacture, sale, and transportation of alcoholic beverages in the U.S. and its possessions. Contrary to common belief, Prohibition in America did not prohibit the purchase or consumption of alcohol.

Dried grapes commonly sold as “bricks or blocks of Rhine Wine,” “blocks of port” and so on. They carried a warning. “After dissolving the brick in a gallon of water, do not place the liquid in a jug away in the cupboard for twenty days, because then it would turn into wine.”47

Prohibition in America went into effect on January 16. That day the New York Daily News explained what it thought people could and couldn’t legally do.30

It thought these were legal –

It though these were illegal –

Californians largely welcomed the start of Prohibition. Temperance sentiment had long been strong in the state. It had elected the only Prohibition Party member of Congress. It had also given the Prohibition Party‘s presidential candidate the largest popular vote in history.31

During National Prohibition, some temperance leaders hired a scholar to rewrite the Bible by removing all references to alcohol beverage.58

Many Prospered from Prohibition

The most famous Prohibition agents in the country were Isidor (Izzy) Einstein and his fellow Prohibition agent, Moe Smith. Izzy and Moe made 4,932 arrests of bartenders, bootleggers and speakeasy owners. They had a 95% conviction rate.

After a busy day enforcing Prohibition, the famous agents relaxed and enjoyed their favorite beverages. They were beer and cocktails!80

On one very busy day, they raided 48 speakeasies. Their boss called them to Washington. He said “You get your name in the papers all the time … whereas mine is hardly ever mentioned. I need to ask you to remember that you are merely a subordinate, not the whole show.” After their names appeared again they were dismissed “for the good of the service.”106

The government had long required the denaturing of industrial alcohol. That is, adding soap and other substances to make it undrinkable. But bootleggers devised ways of ‘re-naturing’ it.

In reaction, by1927, the new denaturing formulas included some notable poisons. There was kerosene, gasoline, benzene, brucine, cadmium, iodine, zinc, mercury salts, and ether. There was also formaldehyde, chloroform, camphor, carbolic acid, quinine, and acetone. (Formaldehyde is the major component of embalming fluid.)

The Treasury Department also demanded the addition of more methyl alcohol. It was the last that proved most deadly. During that year alone, 700 people died from the poisoning in New York City alone.75

The American Medical Association (AMA) denounced limits on how much medicinal alcohol doctors could prescribe. It said there should be no laws restricting the use of therapies by physicians.76 Yet ten years earlier the AMA had officially supported Prohibition. It said alcohol’s “use in therapeutics … has no scientific value.” However, doctors found that writing prescriptions for alcohol was highly profitable. Now, the AMA insisted that alcohol was useful in treating 27 separate conditions. They included diabetes, cancer, asthma, dyspepsia, snake bite, lactation problems and old age.77

Prohibition clearly benefited some people. Notorious bootlegger Al Capone made $60,000,000. That’s sixty million dollars… per year. (And he paid no income tax on it.) The average industrial worker earned less than $1,000 per year.70 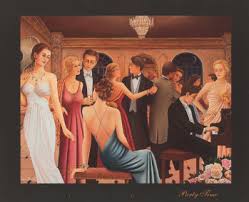 ‘Starting in the 1930s, cocktail parties became popular forms of entertainment This is also when the social practice of having a drink (or two or three) before dinner became widespread.’91

Temperance forces rallied to stop the tide. But more and more people became convinced that Prohibition wasn’t stopping drinking. They came to believe that it was making problems worse. And that it was also creating new problems.

We’ve seen the story of prohibition in America.

Now let’s continue the story. It’s the Repeal of Prohibition.