It claimed to be ‘the only strictly total abstinence order that has successfully combined its temperance principles with its beneficiary work.’1 The latter referred to that fact that it offered life and disability insurance at cost to its members. The Royal Templars of Temperance paid benefits of up to $5,000. That would equal  over $127,000 today. The Templars claimed to have had ‘no deaths from intemperance.’2

The Templars expanded to 27 states as well as both Canada and Sweden. It claimed about 50,000 members. About 20,000 members were in the beneficiary or insurance department. The rest were social members.

Male and female members had equal rights in the Templars.

A number of other temperance groups existed in the U.S.  Many were not fraternal. 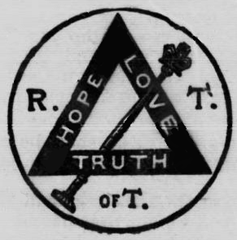 Templars of Honor and Temperance

Methodist Board of Temperance, Prohibition, and Public Morals

American Temperance Society (American Society for the Promotion of Temperance)

American Society for the Promotion of Temperance