The Sons of Temperance was a brotherhood of men who promoted temperance and mutual support. It spread rapidly throughout the U.S. during the 1840s. It was the best known fraternal temperance group at that time. But its membership was secret.

Brothers’ names were not publicly revealed. This protected the group. It would have been embarrassing if a brother were seen violating its codes of conduct. It also protected brothers from any negative consequences of membership. 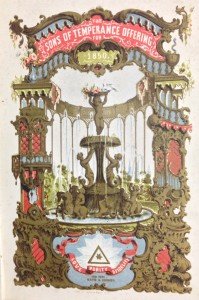 The group’s three goals were to

1. Shield brothers from the evils of intemperance.
2. Provide help in times of sickness or death.
3. Raise the character of brothers.

Becoming a brother was not easy. First, a man had to be nominated by an existing brother to be considered for membership. Then three other brothers would investigate him. They needed to see if they thought he was worthy.

Nor was it inexpensive to be a member. The Sons of Temperance had an initiation fee of two dollars. This was expensive. It was equal to a typical worker’s weekly incomer. In addition, the weekly fee was six cents.

Brothers had to visit any sick brother at least once a day. And the names of any brothers who were ill were announced at each meeting of the brotherhood.

The Sons of Temperance spread rapidly during the 1840s. It had over 5,000 chapters in the U.S., England, Ireland, and Australia.

Longmate, N. The Waterdrinkers. A History of Temperance.  London: Hamilton, 1968.