Here’s a general overview of what you may expect if you’re stopped for drunk driving. Sometimes the charge is DWI (driving while intoxicated). It also applies to DUI (driving under the influence). The terms vary from state to state as well as the BAC (blood alcohol concentration) to which they refer. And some states use different terms. For simplicity, we’ll use the term drunk driving.

In reality, police stop drivers for suspected drunk driving. Alternatively, they stop people for traffic infractions. If the drivers’ behaviors suggest impairment, the officers investigate them for possible drunk driving.

In most drunk driving cases, an officers stops a driver because of signs that the driver might be intoxicated. Police academies teach officers to look for common signs of impairment.

The chances of being stopped for drunk driving go up greatly from midnight to about 4:00 am. And the chances skyrocket on weekends and holidays.

If you’re stopped for drunk driving, the officer will ask for your driver’s license and registration. The officer might also ask for your proof of insurance.

As you retrieve these items, the officer will watch for signs of impairment. For example, do you fumble for the documents? Do you smell of alcohol or marijuana? Do you slur your words? If so, these things will appear in the police report.

The officer will ask if you’ve had anything to drink. Many people will say they’ve only had a drink or two. However, police hear that all the time.

If you admit to having had a sip or more of alcohol, the officer will investigate in detail. And if you say you’ve had nothing to drink, they’ll be highly skeptical. Of course, they’ve heard that countless times before.

In fact, people generally underreport their alcohol  consumption by about 40% to 60%. And that’s not when they’re facing drunk driving charges and arrest.

The officer may ask you to follow a moving pen with your eyes or to count backwards. Or to do some other similar task. Politely decline. It’s illegal in every U.S. state for an officer to insist that you take this test.

It’s also legal in every state for an officer to lie to you if you’re stopped for drunk driving. Therefore, many officers falsely insist that drivers must take the test. Doing so makes their job much easiefr. They see their job as collecting evidence to convict you.

The field sobriety test has three parts. They’re the One-Leg Stand, the Walk and Turn, and the Horizontal Gaze Nystagmus.

However, 30% of volunteers fail the test under ideal conditions. They take it indoors and they know they won’t go to jail if they frail it! But you don’t have either luxury. 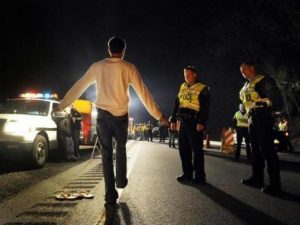 For example, the One-Leg Stand is an excellent indicator of age. It’s also a good test for symptoms of a vast array of medical conditions.

The Horizontal Gaze Nystagmus is highly subjective. And the officer who judges your performance thinks you’re guilty of drunk driving. That’s a very bad combination for you. Any performance less than perfect is a failed test. Not surprisingly, defense lawyers advise people not to take a Field Sobriety Test.

Taking the test is completely voluntary in every state of the U.S. But remember that officers can falsely tell you that the law requires you to take it. Yet you have a Constitutional right to decline.

One young man in California secretly recorded his traffic stop on his cell phone after being stopped for drunk driving. The officer arrested the man after he refused the test. The judge listened to the recording and ruled that the officer arrested him as punishment for not taking the test. The young man settled with the city for $70,000. You can listen to the recording.

What this man experienced probably occurs very frequently. However, he had the recording as evidence.

The officer will ask you to take a “portable breath test.” People tend to call it a breathalyzer test. However, “Breathalyzer” is actually the brand name of a portable alcohol breath test or estimator.

Portable alcohol breath tests are much less reliable than the breath testers in police stations. Nevertheless, the devices are all only estimators of BAC. The only way to measure BAC is by drawing a sample of blood.

Because of their unreliablity, many states prohibit the results of portable breath estimators in court.

The purpose of the test is simple. It’s to prove there’s reasonable cause to arrest you after being stopped for drunk driving.

You can legally refuse to submit to the portable devices. However, you must submit to the machines in police stations. That’s because they’re not as unreliable.

If police decide they have probable cause to arrest you for drunk driving, they will do so. They will put you in hand cuffs and take you in a police vehicle to a police station or jail. Police will take your “mug shot” and finger prints. Then they  will lock you in a jail cell, hopefully alone.

You will stay in jail until someone bails you out.  Or until a judge releases you on your “own recognizance.” If you’re arrested on Friday night and no one bails you out, you may spend the weekend in jail. In addition, some states require you to stay in jail at least until you’re sober.

When they arrest you, police usually take your license. They then issue you a temporary driving permit. It’s good until the court or the Department of Motor Vehicles decides whether to suspend your license.

All states in the U.S. have “implied consent” laws. They punish  drivers who use their Constitutional right against self-incrimination. These laws require drivers to submit to chemical testing after police arrest them.

On the other hand, it is legal to require people to take alcohol breath tests. As a result, refusing such a test usually carries more severe punishment than being convicted of drunk driving.

Prosecutors can usually tell a jury that a driver refused a chemical test. Thus, in some states, juries can convict a driver of both refusing the test and of drunk driving.

You wouldn’t ask your family doctor to do brain surgery. So why would you use the lawyer who drew your will to do the specialized work of a defense lawyer? Most lawyers would suggest using an attorney who specializes in DWI defense. Or better yet, one who does only DWI defense.

It’s easy to keep your BAC low. Have no more than one alcoholic drink per hour. Remember that standard drinks of beer, wine, and spirits have the same amount of alcohol. It’s six-tenths of one ounce each.

Also be sure to eat or munch food while drinking. Alternate alcoholic with non-alcoholic drinks. Don’t play drinking games or have drinking contests. Avoid punches or drinks in unusual size containers. It’s hard to know how much alcohol they have. Thus, it’s hard to pace them. Understand that BAC continues to rise after you stop drinking. And consider buying a personal alcohol breath estimator.

This site opposes impaired and drunk driving. But it also supports the U.S. Constitution and the protections it grants to the innocent and the guilty

Visit the websites of some DWI or DUI defense lawyers in your city. This can help you learn more specifics that might pertain to you. You might also email the lawyers for clarification.

Now if you’re stopped for drunk driving, you’ll have a better idea of what to expect. And also what to do and not do. But the best option is not to drink before driving. Next best is to keep your BAC well below the legal limit

Please remember that nothing on this website is legal advice. Always consult a lawyer for legal opinion or advice.