A Pennsylvania man was being treated for irregular heartbeat. He described his drinking behaviors, presumably in confidence, to doctors treating him. As a result he lost his driver’s license. The toxicology report from the hospital showed he had no alcohol in his system. So, tell and lose license!

The Pennsylvania Department of Transportation (PennDOT) revoked Keith Emrich’s license. That’s because a doctor reported him as having a medical condition that could impair his driving ability. That medical condition is substance abuse according to PennDOT.

The American Medical Association advises doctors to report only drivers whose impairment poses “a clear risk to public safety.” And also to do so only after discussing the problem with the patient. That’s clearly not “tell and lose license.”

Mr. Emrich said “I come home, and I have a few beers after work.” He says “I didn’t know they could take away my license for that.” Mr. Emrich believes that what he does in the privacy of his own home is none of PennDOT’s business so long as no one else is effected. He had a drunken-driving conviction three decades ago and says he no longer drinks and drives. His employer says Mr. Emrich has never appeared for work intoxicated or even with alcohol on his breath.

Mr. Emrich was diagnosed with arterial fibrillation, which is a fast and irregular heartbeat that affects two million Americans. The disease can be caused by heart disease, lung disease, smoking, excessive alcohol and caffeine consumption, or other factors.

A state law requires doctors to report any condition that might compromise a patient’s ability to drive safely. It requires revocation of licenses until drivers can prove to the satisfaction of PennDOT that they are competent to drive. The agency revokes 5,000 to 6,000 driver’s licenses each year.

A few states that require doctors to report motorists with medical conditions that might affect their driving. They include California, New Jersey, Delaware, Oregon and Nevada. All other states and the District of Columbia permit physicians to submit such reports. 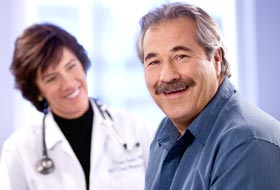 Medical ethicists say such laws discourage patients from giving their doctors information important for diagnosis and treatment. Thus these laws threaten the health and life of patients.

They also point out the obvious. Just because a person frequently drinks a lot doesn’t mean that the person ever drives under the influence of alcohol.

“A man who has sex isn’t a danger to drive – unless he’s doing it in the car while he’s on the road.” So says Dr. Norman Quist, publisher of the Journal of Clinical Ethics.  That’s a peer-reviewed quarterly. Dr. Quist says that taking Emerich’s license has “got to be the wackiest application of a principle that I’ve ever heard of.”