Temperance songs were very popular during the 1800s. The temperance movement was growing very strong. In addition, the U.S. was a nation of singers. They sang at churches, revivals, political rallies, camp meetings, club meetings, at home, and elsewhere. It was a popular form of entertainment in a time without radio, TV, and other diversions.

Temperance leader Frances Willard stressed the importance of temperance songs. She believed that “the magic power of song” should be exploited. “Song is a sentiment maker and…every chorus rendered at a public entertainment ought to add new converts to the cause of Temperance.”

In addition, the enthusiasm and commitment of temperance supporters could be maintained through temperance songs at rallies, meetings, churches, parades, and elsewhere.

As churches became involved in the temperance movement, they began to see drinking alcohol as a sin. This, of course, supported the newer objection against all alcohol. But it created a problem. Jesus had made and consumed wine. To deal with this problem, theologians developed the ‘two-wine’ doctrine. When Jesus made or drank ‘wine,’ it was unfermented grape juice. And when the Bible made positive references to ‘wine,’ it was really only grape juice. But any negative statements about wine referred to fermented grape juice.

Early temperance activists saw the problem at the individual level. ‘Drunkards’ lacked moral strength. Sobriety could be achieved through religion. Thus, early temperance songs reflected that view. As time passed, more and more people saw the solution at a societal level. Increasingly, there were calls for government to prohibit, not simply restrict, the availability of alcohol. Lyrics began to emphasize this, as in the song ‘Prohibition.’

Hark! the world is hoarse with wailing.
Lamentations unavailing.
For today is heap’d with sorrow,
And there’s more to come tomorrow.

Oh! thou earth and thou great heaven,
Are no means of rescue given?
Yes, there are on one condition.
Yes, there are with prohibition
….
Talk no more of mere restriction.
Do not trifle with conviction.
We may fence the regulation,
It must come to prohibition.

The call for prohibition encouraged political activism. This can be seen in ‘Vote as You Pray.’

Can you go on thus my brother.
While praying day by day.
‘Thy kingdom come, thy will be done,’
And yet not vote as you pray?
….
Do not cease from prayer, no never!
But pray on while you may.
But if you would know your pray’r is heard,
Be sure to vote as you pray.
….
Let us wake from this delusion.
That praying will win the day.
Unless our prayer and votes agree.
Then always vote as we pray.

The Woman’s Christian Union (WCTU) promoted what it called Scientific Temperance Instruction. The goal was to make the coming generations ‘trained haters of alcohol.’ This intent can be seen in ‘The Future Law-Makers.’

I’m a little ‘Loyal’ Legion boy/girl.
I’m only ten years 0ld.
But in the cause of temperance,
My name has been enrolled.

I don’t know much about the curse,
But this I know full well.
That wine and cider, gin and rum,
They should never sell.

Discover more about temperance songs with the resources at the bottom of this page. 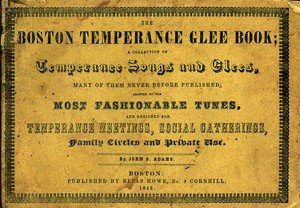 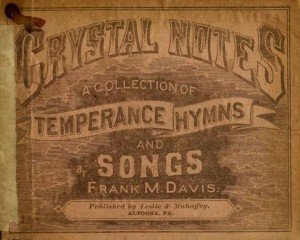 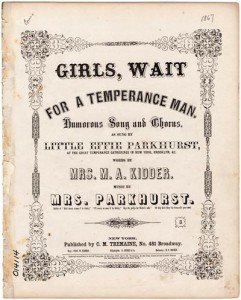 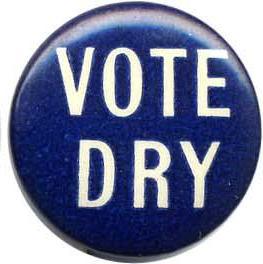 Please note: Lyrics of the temperance songs presented above belong to their respective copyright owners. They are presented here solely for educational purposes. Contact owners for permission to use.