Tequila is a distilled beverage from the fermented sugars of the blue agave (agave tequilana weber azul). Producers must make it in the Mexican state of Jalisco or in a few other specific areas of the country. And from agave grown in those areas.

Tequila has two basic categories. One is mixtos and the other is 100% agave. Mixtos must use 51% or more agave sugars. Obviously, 100% agave uses no other sugars.

In addition, the beverage falls into one of these five types.

Myth: “Tequila bottles contain a worm.” This is never done. However, some mezcal producers put butterfly larva (gusanos de maguey) in their bottles.

Incidentally many people enjoy eating gusanos as a meal. Some prefer gusano rojo (red, pronounced row-hoe). Others like gusano de oro (gold). So now you have the truth.

Myth: “People properly drink it with only salt and lime.” False. In Mexico, people generally enjoy it neat. That is, straight or with nothing added). Many people prefer drinking it alternating with shots of  sangrita. That’s a beverage of orange juice, tomato juice and hot chile. Also popular is drinking a shot of white tequila, one of lime juice, and one of sangrita. And of course, there are many cocktails that include “the spirit of Mexico.”

Myth: “Tequila is cactus juice.”  This is simply false. It’s true that both agaves and cacti live in arid areas. In spite of that, agaves are not cacti. So it isn’t cactus juice.

Myth: “People tend to become aggressive when they drink tequila.” However, there’s no evidence that different kinds of alcoholic beverage actually cause different moods or behaviors. On the other hand, people’s expectations heavily influence how they act when intoxicated.

Obviously, alcohol effects heartbeat, breathing, reaction speed etc. And drinking enough causes people to lose coordination, balance, etc. This is one reason for the myth. It seems so plausible. If alcohol can effect these things, people assumed it could cause our moods and behaviors.

So, if people think that Mexico’s most popular spirit will make them aggressive, they will tend to become aggressive. But it was their belief that makes them aggressive, not their alcoholic beverage choice. Discover more at Gin Makes You Cry and Bubbly Makes You Flir

February 22nd is National Margarita Day in the U.S. But people anywhere can celebrate it!

Williams, I. Tequila: a Global History. London: Reaktion, 2015. (Includes many cocktail recipes and advice on buying, storing, tasting and serving this Mexican spirit.)

Zavatto, A. The Complete Idiot’s Guide to Bartending. Indianapolis: Alpha, 2011.

Abocado means not aged in wood.

Agave (ah-gah-vay) is a plant of great economic importance to Mexico. Agave Azul is blue agave or agave tequilana weber azul. Producers use it to make Mexico’s favorite distilled spirit. More specifically, it’s in the family agavaceae (ah-gav-ay-see-ee). Its genus is agave. The species is tequilana (te-kee-lee-ah-na). And the cultivar is Weber’s blue.

Agave sazon (sah-zone) is ripe agave. That is, ready to harvest.

Aguamiel (ah-gwah-mee-el) is the sap from the core (piña or cabeza) of the agave plant. It has a high level of sugar.

Alambique (al-am-bee-kay) is a still. Producers distill alcohol by boiling liquids that have alcohol in them. They then condensing the steam through condensation. Alcohol boils before water. Thus, it condenses first.

“Smile if you call me old.”

Añejo (an-yay-ho) means old. Producers aged this at least one year but fewer than three in small oak barrels.

Caballito (ca-ba-yee-to) or “little horse” is a traditional shot glass. It’s tall, wider at the top, and holds two to three ounces.

Cabeza (ca-bay-zah) is Spanish for head. It’s another name for the piña, the core of the agave. The first portion of the distilled liquid is also the head.

Concha (cone-ka) or shell. If you shake a bottle of tequila, a bubble stay on the top. If it doesn’t, you may have a mixo instead. Many people call it a perla (pearl).

Consejo Regulador del Tequila (cone-say-hoe-reg-u-la-door) or CRT. This is a private, non-profit organization protecting the name and quality of tequila. Members include the government, agave farmers, distillers, bottlers and distributors.

“Really smile if you call me extra old!”

Gusano (ga-sah-no) A butterfly larva (gusano de maguey) that can live in agave. Some producers of mezcal put a gusano in their bottles. But they never put them in tequila bottles.

Hecho (ay- cho) en Mexico means made in Mexico. Producers print this on the labels of distillate made from 100% agave.

Jalisco (ha-lees-coh).  The Mexican state which produces by far the most tequila.

Joven (hoe-vin) means young. Producers don’t age this. However, they can flavor it with sugar syrup, caramel, oak extract, or glycerin. Alternatively, they can make it by blending blanco with aged or extra-aged product. Many producers call this oro (gold).

Madurado is another word for reposado.

Maguey (mah-gay) is the generic name for all agave species.

Mezcal (mez-call) is another name for maguey plant.. Additionally, Mezcal is the generic name for all spirits distilled from the agave.

Mixto (mix-toe). Distillers make this from a mixture of at least 51 percent blue agave sugars. They supplement it with other plant sugars and distill it twice. fermentation.

Mosto (moss-toe) is must. Producers toast and grind piñas and call the resulting mixture mosto.

Piña (peen-yah) is Spanish for pineapple. The core of an agave resembles a pineapple. Hence, the name. Cabeza (head) is another name.

“Show me the proof!”

Proof is a measure of the percentage of alcohol in a liquid. In the U.S. and Canada, it’s twice the percentage. Thus, a beverage of 40% alcohol is 80 proof. Different countries measure alcohol differently.

Pulque (pull-kay). Brewers make this beer-like beverage from the sap of agave.

Sangrita is a non-alcoholic beverage. It contains tomatoes, orange and lime juice, onions, salt and hot chili peppers. Don’t confuse sangrita with sangria. The latter is a fruit juice and wine beverage.

Tepache (tee-pach-ee) is wort. That is, the fermented pulp and juices of agave piñas.

Yeast is a microscopic plant that converts sugar into alcohol and carbon dioxide. 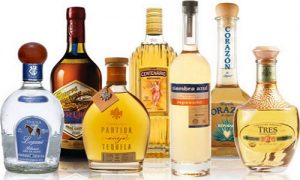 There are over 1,400 different brands. This is a short list brands popular with many afficianados.

Some distilleries make many brands. In addition, many brands don’t have their own distillery. Instead, they lease the use of one.

If you would like your favorite brand listed, send your recommendation to hansondj[at sign]potsdam.edu.

Please note. No one has provided benefit of any type for listing on this page.