The following article by Dr. Alex Berezow is reprinted by permission of the American Council on Science and Health. In it, he points out fallacies of an Atlantic anti-alcohol article.

Completely banning alcohol would only prevent about 3.5% of cancer deaths. That, of course, means the other 96.5% of fatal cancers are caused by things other than alcohol. Given that cancer is the #2 leading cause of death in America, there’s a good chance that you’re going to die of cancer no matter what you do. So chill out and have a drink. 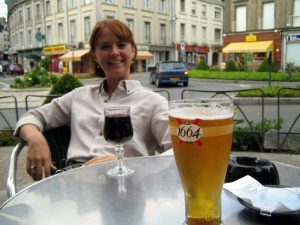 It’s early, but The Atlantic is already in the running for worst science article of the year. Using a combination of cherry-picked research and bizarre political advocacy, the magazine has published an article with the outrageous clickbait headline calling alcohol “America’s Favorite Poison.”

It goes downhill from there, with one dubious, context-free claim after another. Let’s go through them, one by one.

Today, warnings about the devil drink will win you few friends.

The reason is because America is tired of scolds. We have a culture in which “being offended” is a badge of honor. Busybodies police our language, file frivolous lawsuits, and pass numerous laws meant to regulate private behavior. It’s enough to drive somebody to start drinking.

In a country where there is an interest group for everything, one of the biggest public-health threats [alcohol] is largely allowed a free pass. And there are deep historical and commercial reasons why.

Like donuts, alcohol in and of itself is not a health threat. Consuming too much alcohol (or donuts) is a health threat. And the implication that Big Alcohol is the reason why Americans aren’t worried about alcohol is a big stretch. Other Western cultures (European and Australian come to mind), have a very relaxed attitude toward alcohol. In Poland, a country I frequently visit, you can buy alcoholic drinks in coffee shops. You can’t blame devious marketing by American Big Alcohol for that.

As one major study recently put it, “Our results show that the safest level of drinking is none.”

Yes, a “major study” concluded that. However, it was severely criticized by other members of the scientific community in letters to the editor, and its conclusion was not justified by its own data. The data showed that there were no significant health risks from consuming one alcoholic beverage per day, yet the authors concluded otherwise. In September 2019, I was invited to the 9th European Beer & Health Symposium in Brussels to debunk this paper.

Alcohol’s byproducts wreak havoc on the cells, raising the risk of liver disease, heart failure, dementia, seven types of cancer, and fetal alcohol syndrome. Just this month, researchers reported that the number of alcohol-related deaths in the United States more than doubled in two decades, going up to 73,000 in 2017. As the journalist Stephanie Mencimer wrote in a 2018 Mother Jones article, alcohol-related breast cancer kills more than twice as many American women as drunk drivers do.

There are too many claims here to analyze each of them, so let’s just focus on one and show how it’s misleading. It is absolutely true that alcohol — even in low to moderate amounts — increases the risks of some types of cancer. Aafje Sierksma of the aforementioned European Beer & Health Symposium told me, “There is indeed a linear relationship between alcohol consumption and breast cancer. So each drop of alcohol increases the risk.” 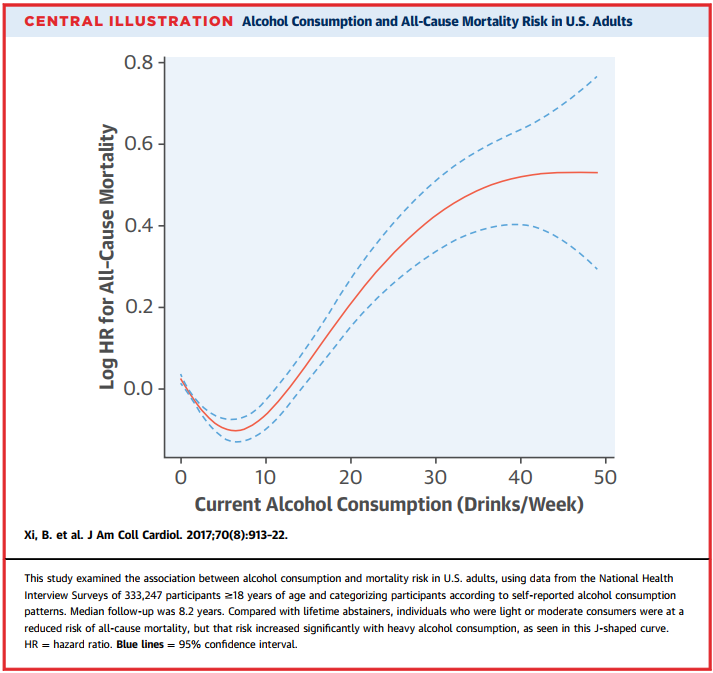 However, it is also true that moderate alcohol consumption is associated with lower mortality. This relationship is known as a J-shaped curve. For reasons that aren’t understood, people who report consuming roughly one drink per day are less likely to die than those who do not drink. This relationship holds even after excluding former drinkers (who often do so for health reasons).

So, while it very well could be true that any alcohol consumption increases the risk of death from breast and certain other types of cancer, it’s also probably true that moderate drinking is associated with an overall lower risk of mortality. Therefore, logic dictates that the risks from other potential causes of death are slightly lowered by alcohol. Removing that context is intellectually dishonest.

Regardless of how much Americans love to drink, the country could be safer and healthier if we treated booze more like we treat cigarettes.

Oh good grief. Moderate alcohol consumption is a real thing. But there’s no such thing as moderate smoking. Lighting something on fire and inhaling the smoke directly into your lungs is bad for you, no matter what.

Furthermore, the risk of alcohol must be put into the context of other risks. Since everybody freaks out about cancer, let’s use that as an example. The following graphic, from a report (on page 26) by the American Association for Cancer Research, shows the relative contribution to cancer incidence by various risk factors: 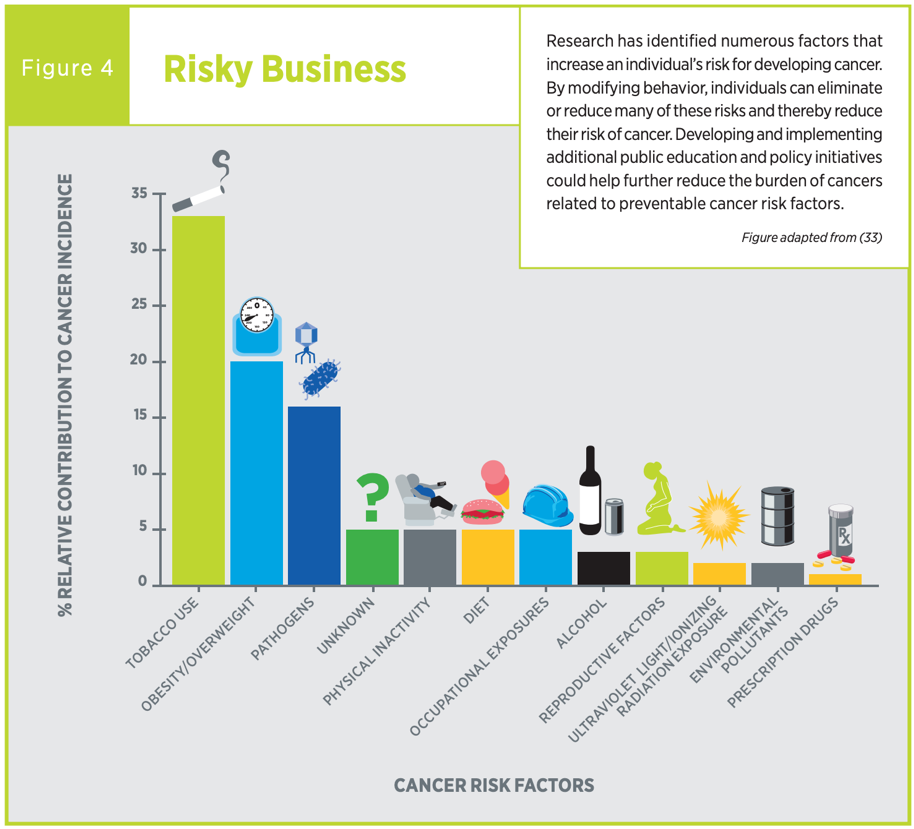 Yessiree, alcohol contributes to cancer. But far bigger risk factors include tobacco, obesity, and various pathogens (which are responsible for 12% of global cancer incidence). Watching too much TV and eating too much ice cream and cookies? Yep, that causes cancer, too, more so than alcohol. Do you like to go outside? Sorry, the sun causes cancer. Do you have an illness that requires medication? You got it. Cancer.

Here’s (literally) the bottom line: You’re going to die. I’m going to die. Everybody you know and love is going to die, too. The only outstanding questions are how and when. Completely banning alcohol would only prevent about 3.5% of cancer deaths, meaning that the other 96.5% of fatal cancers are caused by things other than alcohol. In other words, given that cancer is the #2 leading cause of death in America, there’s a good chance that you’re going to die of cancer no matter what you do.

So chill out and have a drink.

Prohibition Supported by Almost One in Five Americans Today

Today’s Neo-Prohibitionists in the U.S.

“If You Can’t Say Something Bad about Alcohol, Don’t Say Anything”

Research consistently under-report that people tend to under-report their alcohol consumption by roughly half. This means that on average they drink about twice as much as they report. Thus, if people report having one drink per day, they probably have two.  As a result, the health benefits of moderate drinking apply to much higher consumption levels.

Note. The “Resources on Anti-Alcohol Sentiment” are added to Dr. Berezow’s article.