Anti-Saloon League founder Howard Hyde Russell founded the Lincoln-Lee Legion in 1903. It was to promote the signing of total alcohol abstinence pledges by children.

The organization was originally called the Lincoln Legion. However, in 1912 it was renamed the Lincoln-Lee League. That was to make it more appealing to Southern children and their parents.

The Lincoln-Lee League’s three goals for members were abstaining from alcohol, promoting prohibition, and being good church members.

Children who signed the pledge committed themselves to abstaining from alcoholic beverages for the rest of their lives. The pledge asserted that drinking alcohol “is productive of pauperism, degradation and crime….”1

Girls who signed the pledge were “Willards,” after Frances Willard of the Woman’s Christian Temperance Union (WCTU). Boys in the North were “Lincolns.” Boys in the South became “Lees.”

By 1925, over five million children had signed the total abstinence pledge cards.

The Lincoln-Lee Department of the Anti-Saloon League published a temperance magazine for those who had signed the pledge.  It was the Uncle Sam Advocate.

It also published the Lincoln-Lee Legion Patriots Scorebook. Meetings of the group used this booklet. It provided a history of the League, a “response service,” songs for use at meetings, and a behavioral scorecard. 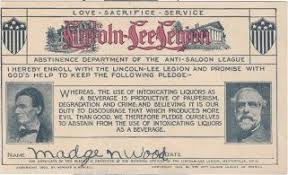 Mentors, called umpires, gave the pledge signers credit marks or scores. These were for such things as

The pledge concept is currently used by the Drug Abuse Resistance Education (DARE) program. However, its pledge numbers dwarf those of the Lincoln-Lee Legion.

Resources on the Lincoln-Lee Legion