Utah alcohol laws apply to the state’s residents and visitors. They are often complex. When Utah was preparing to host the Olympics the state made some efforts to streamline its alcohol laws.

Mormons settled Utah in the mid-1800s. That is, by members of the Church of Jesus Christ of Latter Day Saints. In fact, the headquarters of the church is located there. Today, fully two-thirds of the Utah’s residents are Mormon. And two-thirds of all Mormons in the US live in the state. Their religion forbids Mormons to drink alcohol. Utah alcohol laws reflect this anti-alcohol view.

Utah is unusual in that it mandates an age of 21 or older to serve alcohol or tend bar. That is also the age for working in a store selling alcohol for consumption elsewhere.

An exception is that persons ages 17 through 20 may sell beer in stores for off-premises drinking. However, a person aged 21 or older must supervise them. Also, the supervisor must be on the premises at the time of sales.

Utah alcohol laws prohibit drinking alcohol by those under 21. There are absolutely no exceptions for medical, religious, or other reasons. Thus doctors may not prescribe any meds that contain any alcohol. Nor may priests or ministers give communion wine. And parents may not give wine for Seder.

For those under age 21, it is illegal to drive with any measurable alcohol in the body.

Utah alcohol laws consider adults age 18, 19, and 20 to be minors or children. And they refer to them as such.

Utah has a government alcohol monopoly on the sale of virtually all packaged beer, wine, and distilled spirits. Spirits are vodka, rum, gin, bourbon, tequila, scotch, etc. The exception is that other retailers may sell 3.2% alcohol beer elsewhere.

Grocery and convenience stores, taverns, beer bars and some restaurants may sell beer 3.2% alcohol by weight or under. Most people call this “near beer.”

“Zion curtains” are solid translucent partitions to hide the preparation of drinks in restaurants. The intention was to “de-glamorize” alcohol and also not to offend Mormons. In 2017, the state modified the law requiring them. Now, by making certain physical and other modifications, not all restaurants need them.

It’s a violation of Utah alcohol laws to sell alcohol to anyone under age 21. Even if they are adults. The state distinguishes between two offenses.

One is if a seller doesn’t know the buyer’s age and fails to check the ID. The penalty for this is a fine of up to $1,000 and imprisonment of up to six months.

Another is if the seller knows that the customer is under 21 but sells to them anyway. The penalty for this is a fine of up to $2,500 and imprisonment for up to one year.

All alcohol sales clerks must complete state alcohol training focusing on identifying valid IDs. It also include how to deny sale to anyone under 21.

If a clerk sells to an underage customer, the offender receives a written warning. In addition, the clerk must retake the state alcohol training.

The penalties for the store are different. A first violation results in only a written warning. If a second occurs, there’s a $250 fine. A third violation results in a suspension of all alcohol for 30 days. There’s also a $500 fine and probation for one year. If another offense occurs during the probation, Utah revokes the license to sell beer.

Utah alcohol laws regulate the size of alcohol containers. They also prohibit the sale of kegs of beer.

It’s illegal for anyone under 21 to buy, or attempt to buy, alcohol. In addition, it’s a crime to use a false ID to buy alcohol. Penalties include driver’s license suspension. It is also a crime to lend, transfer, or sell a false ID.

Retailers have the right to seize IDs that appear to be false. And they may detain anyone under 21 suspected of using a false ID to buy alcohol. In addition, stores may sue such persons. If the customer is under 18, the store may sue the parent or guardian.

Thus the store can recover any losses it suffered as a result of the illegal sale. Finally, it may also recover lawyer’s fees and other expenses incurred in collecting the money.

Visit Avoid a DUI in Utah (5 Things You Need to Know about DUI).

States use blood alcohol concentration (BAC) to define legal limits for driving. Utah is the only state in the U.S. to impose 0.05% or higher as illegal. That is driving under the influence (DUI). For drivers under 21, DUI is 0.02% or higher.

It’s important to know that police can arrest drivers with legal BACs. All that’s necessary is for an officer to think that the driver’s driving ability suffers impairment by drinking alcohol. Utah calls this “less safe” DUI.

However, many things can give drivers the appearance of intoxication. Probably the most common is diabetes. Low-carb diets produce compounds that smell like alcohol. And fatigue often causes weaving and other behaviors that resemble intoxication. Obviously, a “DUI under the legal limit” can cause drivers many expensive headaches.

These are the penalties for DUI by drivers age 21 or older.

These are the penalties for DUI by drivers under the age of 21.

All drivers of any age have a U.S. Constitutional right to decline submitting to a chemical BAC test. However, Utah punishes those who use their right. For drivers 21 or older, it’s license suspension for 18 months. A second use leads to a suspension for three years.

For drivers under 21 who use their right, the punishment is simple. It’s license suspension is for 18 months or until age 21, whichever is longer. Judge may order mandatory IID on vehicle for three years after reinstatement of license.

However, there are no legal penalties for refusing to take a field sobriety test. They are highly unreliable.

Indeed, 30% of totally sober people fail to pass them under ideal conditions. That is, about one of three people with zero BAC (0.00%) don’t pass.

For this reason, lawyers strongly urge drivers never, ever to take them. They say to very politely refuse. And to do so as often as needed. But this may take great willpower.

That is because police have many clever ways to convince drivers to submit. Often they falsely insist that the law requires it. False. In fact, no state requires it. Or that drivers can prove they’re innocent by passing the test. On the contrary, the burden is on the state. That is, it’s the state that has to prove that the driver is guilty. The driver needs to do nothing. To add insult to injury, police don’t consider passing the highly subjective to prove innocence!

Always keep in mind a very important fact. That is, that while investigating, police can legally lie. So don’t be a sucker!

Boaters are under the influence if their BAC is 0.08% or higher. Or if alcohol and/or drugs make them unable to operate a boat safely. Of course, that is in the subjective opinion of the arresting officer. Boaters under 21 are BUI if they have any measurable alcohol in their bodies.

It’s illegal to drink alcohol while operating a boat, even with a legal BAC. Opened alcohol containers are legal on a boat, but not if within reach of the operator.

Use of the right to decline submitting to a chemical BAC test is admissible in court. In addition, it may result in suspension of the vehicle driving license.

Utah is the only state in the U.S. with an illegal BAC of 0.05%. The state relies heavily on tourism to its many attractions. But now a major problem is attracting highly profitable large conventions. That is because of its highly restrictive and confusing alcohol laws.

The 0.5% BAC has caused much controversy. For example, an ad in one Utah newspaper was in the form of a Thank You note. It was by the American Beverage Institute. The note said “Just wanted to thank you for passing the .05 BAC law. Arresting moderate social drinkers for having as little as one drink will certainly make us look more attractive to most tourists, businesses and skiers.” It ended with “Sincerely, Colorado.”

Here are some other examples of opposition to the lower BAC law. 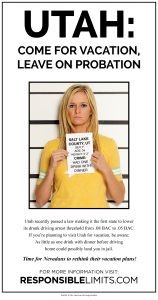 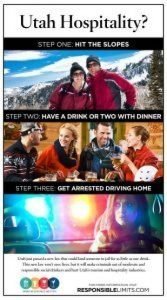 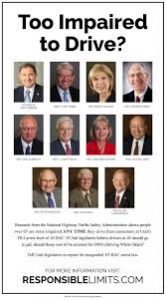 V. Get Legal Advice about Alcohol Laws in Utah

Utah alcohol laws are very complex. Laws are also confusing in other states. Lawyers spend years learning them. Never rely on this site. Nor on any other site.

And beware of the advice and beliefs of family and friends. Or of neighbors, co-workers, or others. Smile, thank them. Then ignore what they say.

Get all alcohol information and advice about Utah alcohol laws from an expert. That is a lawyer holding a license licensed in the state.

At this point, you know much more by far about Utah alcohol laws. So congratulations! Perhaps you know of items that should be included. If so, please contact hansondj [@] potsdam [.] edu/. Thank you.